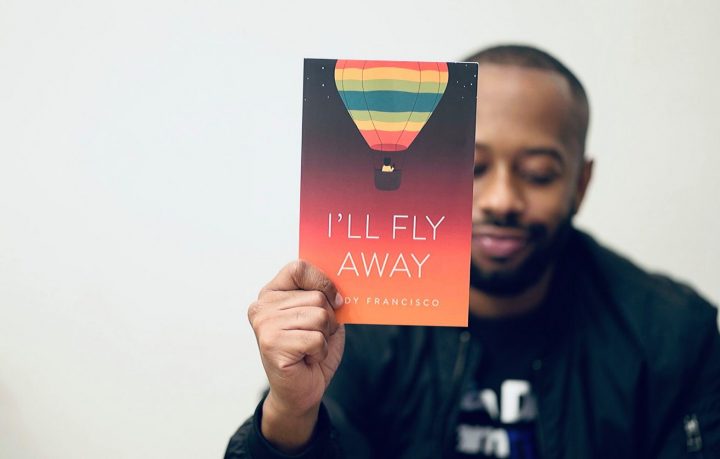 By Aaron Humes: Poet or psychologist? For Rudy Francisco of San Diego, California, the choice was easy: “When it got to the point where I felt like I was going to have to choose,” he said, “I chose my art because that was the thing that fulfilled me.”

Francisco has never looked back, addressing himself to studying the human condition – and his own – through poetry.

Now he has released his second collection of poems, titled “I’ll Fly Away” after the gospel hymn, after his first, “Helium,” in 2017.

Francisco is Belizean-born, of Garifuna descent, and looks at themes of issues affecting the black community including depression, which he struggles with.

The Southwestern College Sun says Francisco has gained a reputation as mentor and inspiration to area writers. His new book centers around the hope that no matter how hard life is, things will get better either on Earth, or in Heaven.

He also explores his Garifuna side, noting that in that language, an Arawakan tongue derived from an African dialect and the language of the Indigenous people of the Caribbean island Saint Vincent mixed with French, English and Spanish words, certain words cannot be straightforwardly transcribed into English, and “There are certain ways to describe feelings (in other languages) we do not have an English translation for.”

This inspired Francisco to base “I’ll Fly Away” on the concept of intransitory language. He made up 30 words with Latin or Greek roots that have poems to correspond with them.

“The anchor of the book is the idea that there are so many things I don’t know how to describe in words,” he said.

Francisco said he feels pressure to represent the Belizean and Black communities, including during an appearance on “The Tonight Show with Jimmy Fallon.”

His poetry often reflects realities of Black Americans, including subjugation of Black people. He also questions his masculinity.

“I really want my daughter to know that I’m a human being,” he said. “I’m flawed, but I’m trying. I may not be perfect, but every day I try to be better.”