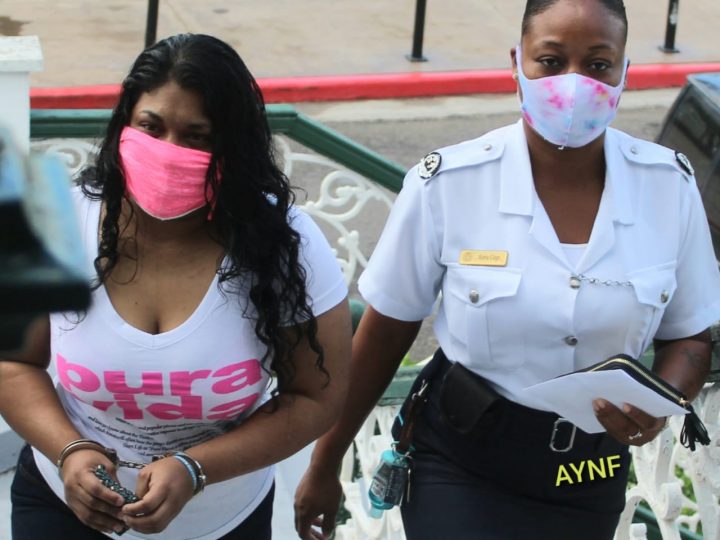 By Aaron Humes: “[Fareed] Ahmad is dead. He died from blunt force trauma and underlying force as a consequence of gunshot injury. At the time [the] injury [was] inflicted, while there was intent to commit grievous harm, intent to kill was not there. Someone shot Ahmad. [The] Crown did not satisfy me that it was you. [I therefore find you] not guilty.”

The Crown, he said, had failed to prove beyond a reasonable doubt to him as the sole judge of the facts and the law that the harm caused to Ahmad was unlawful, that Brown caused Ahmad to be harmed by gunshot on the night of December 28, and that when doing so she had intent to kill Ahmad by means of that harm.

The facts of the case are that Ahmad’s BMW SUV collided into a flatbed truck at Mile 16, George Price Highway, at approximately 12:29 a.m. on December 28. Ahmad, suffering from gunshot injuries and bleeding from the head, was removed from the vehicle first by area residents, followed by Brown. He had asked for water and was told to lie down and not walk. Both were rushed to Karl Heusner Memorial Hospital by ambulance; Ahmad later died.

Pathologist Dr Lloyd Ken determined that Ahmad had been shot twice from his right, the bullets exiting through the forehead on the left. He also sustained a fractured skull on the impact of the vehicle. It caused blood to collect under soft tissue in the brain, causing the organ to swell and other multiple organs to shut down. The medical cause of death was listed as acute vascular injury as a result of blunt force trauma to head due to a motor vehicle collision as a consequence of gunshot wound to the face. The gunshot wounds were the underlying, not immediate, cause of death.

The case for both the prosecution and defence, the judge noted, was riddled with inconsistencies – some minor, others major – which caused various aspects of each to be rejected.

The most significant inconsistency established concerned whether Brown had signed out for and carried a 9mm Bersa pistol with her on the night of the murder. Corporal of Police Abner Itza of the Special Assignment Team said he stayed in the mobile when Brown went into the Racoon Street Police Station that afternoon and did not see her or the pistol after; his colleague Constable Oscar Itch said he had followed them in.

Corporal Itza testified in his opening examination that the pistol signed for was a 9mm Beretta; he had to correct himself on cross-examination to say it was a Bersa.

The gun was found in the vehicle by Fire Service personnel the night of the crash (and not by a Scenes of Crime Technician who claimed to have done so as she got her dates mixed up).

But it was not established that Brown had signed for the weapon as the log sheet the supervisor said she had written on and signed was not attached to his report as evidence. Brown neither admitted nor denied signing out for the weapon on the day of the incident.

Witnesses failed to agree on Brown’s behavior on the day and night of the incident – one said she was seen crying; another that she was asked what was wrong but denied having any problems.

The log sheet, the judge noted, was one of many pieces of evidence crucial to the case that had gone missing from among exhibits in the custody of the National Forensic Science Service, including blood samples, fragments taken from the gun, swabbing  of the nozzle of the gun taken in for testing and so on. “Conclusive evidence” was missing that could have established what happened to Ahmad, he said.

Justice Williams pointed out as well that while Brown as the defendant had nothing to prove, he was skeptical of her claim that she was coincidentally on her way to Belmopan when she got into Ahmad’s vehicle.

Neither did he put much stock in what became the most publicly sensational aspect of the case – that another police officer entered the vehicle and was the one who shot Ahmad after cowing Brown into not intervening. If indeed a third person was in the vehicle as Brown claimed, he could only have been there from the beginning or they went to pick him up; what happened thereafter was pure speculation.

Brown testified under oath that a fellow officer entered the vehicle after Ahmad made a U-turn on the road heading back toward Belize City, after the vehicle stopped briefly. This person whose voice she recognized put a gun to her head and told her not to move, then cocked the gun and shot Ahmad before jumping out of the vehicle. A declining Ahmad released his hand from the steering wheel moments before the crash.

Brown, represented by Senior Counsel Simeon Sampson and Anthony Sylvestre, had been remanded for nearly three years since being charged on December 29, 2017, following her release from the hospital.