Boxing Day holiday is December 28, not 26 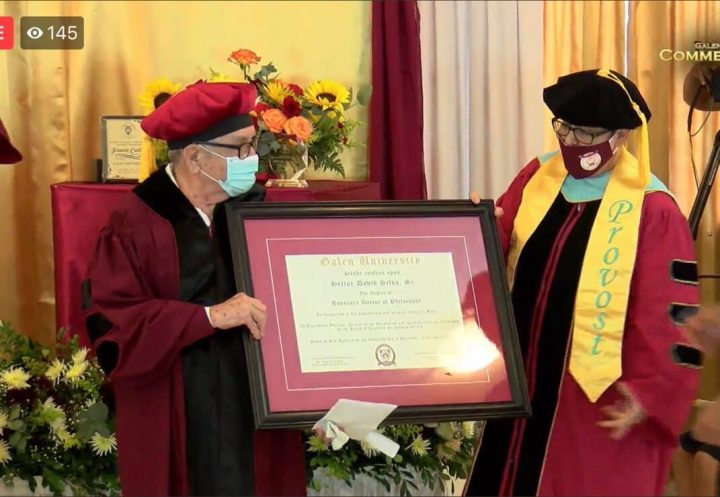 The award was presented to Don Hector by Provost, Dr. Cynthia Aird.

Upon receiving the award, Silva expressed gratitude to the University and all Belizeans.

“There comes a time for everything. To me, it was so gratifying when I was approached by the Provost, Dr. Eve Aird at a store somewhere and she didn’t tell me the whole thing, but she said, Don. Hector, you will have an appointment with us. Fine, then, thereafter, a couple of months ago, Dr. Rene Villanueva joined Dr. Eve and I sat down around a table to talk and they gave me a bit more of the meat of this day. So, I began to wonder,” Don Hector said.

Don Hector as he is affectionately called, is a renowned historian and activist from Cayo. He has served the nation in various capacities after being encouraged to run for office by the Father of the Nation, George Cadle Price.`

“ With sincere gratitude, I received this good news and I was wondering how Galen University selected me from among so many distinguished Belizeans all over the country, men and women but then I became very interested to know that Galen University or someone else there had been watching my footsteps and my whereabouts for the past 70 years. 70 years of my public life was actually informed to Galen University of what I had been doing good or bad and they weighed it and they said we need you so that the world and future generations realize that everyone in this country should contribute to the building of a nation,” Silva stated.

In an interview with BBN, Don Hector shared exactly how his career as a politician began.

“I think that I was not born to be a politician, maybe a psychologist or so but the needs of my country drew me to run for politics. I was invited by the Rt. Hon. George Cadle Price to run for office when I was a student at University in 1957. I was walking past his office and he called me in. He asked me to run for office in Cayo. Since I was studying, I told him that I would ask my dad for his advice. When I returned home, my father said your country needs you, so go,” Don Hector said. He said that since he had already been a member of the People’s United Party (PUP) since 1950, he accepted the calling to serve his country. He first served as a Mayor of San Ignacio and Santa Elena, and then as an elected government Minister.

Don Hector was elected as Mayor of San Ignacio and Santa Elena when he was just 23 years old. During his time as Mayor, he ensured that Santa Elena became a Town and expanded the town through the purchase of lands from the Requena and Melhado Estates in Santa Elena and San Ignacio, respectively. He developed streets, parks, and football fields.

He was actively involved in various committees and stood side by side with the Father of the Nation as the movement commenced for a free and Independent Belize. “We began to work toward the Peaceful Constructive Belizean revolution that would lead us to Independence in 1981. Since we were a colony, we began the revolution in 1964,” he said. During the struggle for Independence, Belize garnered support through Government from Latin American countries and other countries to support its plight for Independence.

By 1981, Belize became an Independent nation and joined the Commonwealth.

And Don Hector’s career continued, being called to serve in the Senate in 2005 and 2008 before his retirement.

He reminisced about working in the first-ever Cabinet of Ministers alongside Madam Gwen Lizarraga, Albert Cattouse, and others. “We worked united and it was teamwork that took us through the struggle to Independence. We went to other countries to garner support for Belize’s Independence,” Don Hector stated.

He went on to say that the Rt. Honorable George Price was strict with all ministers and allowed no form of corruption. He said that as developing villages and Towns, the elected officials ensured to bring water and electricity to their areas.

As a member of the House of Representatives, he played a crucial role in establishing May 1, Labor Day, as a public and bank holiday, in honor of all workers. He made the motion at the House of Representatives and in 1962, Belize began celebrating Labor Day. He was also instrumental in the development of the annual Agricultural and Trade show to give farmers a boost. The show was filled with exhibits of cattle, crops, and more. To build the economy, the administration provided stimulants for the banana and sugar industries. This was done to jumpstart the economy after the devastation of Hurricane Hattie.

In 2005, Silva was honored with the Order of Distinguished Service and in 2008, the Order of the British Empire was bestowed on him, for his service to the people and country of Belize. To date, Silva says that when being honored and awarded such prestigious titles, he follows the lead of the Father of the Nation, the Rt. Honorable George Price, who was known to say, “If they are giving it to you for the service given to our people and country, accept it.”

A prolific writer, Don Hector has also been selected as one of the Belizean writers by the Heritage Library in Belmopan.

An 87-year-young Don Hector remains engaged as a community activist in the Cayo District, and across Belize, and is always willing to share important parts of history, he experienced in building Belize.