No holiday for King Sugar as new crop starts Monday; BSI clarifies stance on production estimate for the season 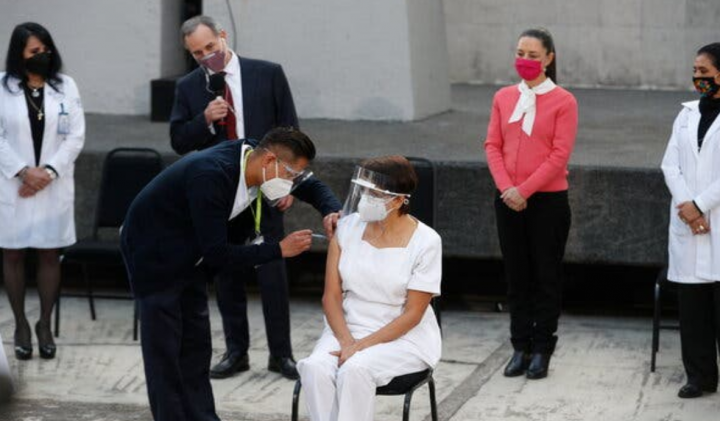 By BBN Staff: Mexico began rolling out its COVID-19 vaccines to essential workers just before Christmas, amidst increasing infections and deaths related to the virus, according to the New York Times.

The first person in Mexico to receive the vaccine, which was made by Pfizer-BioNTech, was María Irene Ramírez, 59, the head nurse at the Rubén Leñero hospital in Mexico City.

“This is the best gift that I could have received in 2020,” Ms. Ramírez told the Mexican media. “We are afraid, but we have to keep going because someone has to face this fight.”

The vaccine rollout coincides with a new wave of infections reportedly spreading across Mexico, with Mexico City being one of the most affected municipalities. Mexico has also seen over 120,000 deaths relating to the virus, making it the fourth-hardest hit country in the world with respect to the number of deaths related to COVID-19.

The country’s response to the outbreak has been widely criticized, with President Andrés Manuel López Obrador refusing to wear a mask in public and continuing to hold public rallies across the country.

“Last week, Mexico City authorities increased the capital’s pandemic alert level to red, the highest status, triggering a shutdown of all but essential businesses. But the federal government had data that should have prompted an immediate lockdown in early December. Instead, it kept the capital open for an additional two weeks,” the NY Times said. “Hospitalizations nationwide have reached levels last seen during the first peak of the outbreak in the summer. With 85 percent of beds filled in Mexico City, according to official figures, doctors are begging on social media for residents to stay home.”

Mexico is one of several countries in the region that have begun rolling out vaccines, alongside Costa Rica and Chile. Belize’s Ministry of Health and Wellness says that COVID-19 vaccines could be coming to Belize by April 2021.