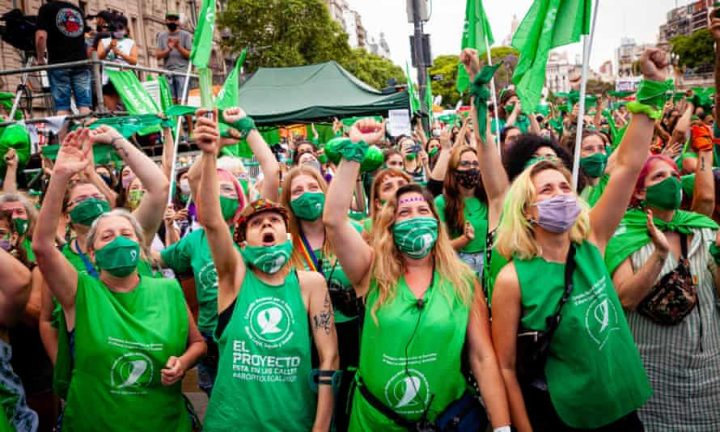 By Aaron Humes: This morning at local time, pro-choice women campaigners in Argentina rejoiced as the country became the largest in Latin America to legalize abortion, the Guardian (UK) reports.

The vote in the Senate to legalises terminations in the first 14 weeks of pregnancy, approved by Argentina’s lower house earlier this month after being put to congress by the country’s left-wing president, Alberto Fernández, went narrowly – 38 to 29 with one abstention.

It culminates five years of mass protest marches by Argentina’s grassroots women’s movement, which began as a Twitter campaign against gender violence that used the hashtag #NiUnaMenos (“Not one less” – meaning no more women lost to gender violence).

“Safe, legal and free abortion is now law … Today we are a better society,” Fernández celebrated on Twitter after the result was confirmed. Fernández has previously said that more than 3,000 women had died as a result of unsafe, underground abortions in Argentina since the return of democracy in 1983.

Argentina joins Uruguay, which decriminalised the practice in 2012, and Guyana, where it has been legal since 1995, as the only South American countries to permit elective abortions. Challenges are also on the table in Brazil, Chile and Colombia, while Cuba has legalized abortion since 1965 and it is permitted in Mexico City and the Mexican state of Oaxaca.

In most countries, such as Brazil, abortions are only permitted in extremely limited circumstances such as rape or risk to the mother’s life, while in some, such as the Dominican Republic and El Salvador, they are banned altogether.

Women protested in numbers after the deaths of two teenagers in 2015 and 2016 who were murdered while pregnant. A similar bill was rejected in 2018 after pressure from the Catholic Church (Pope Francis is originally from Argentina); President Fernandez took up the matter on his election in 2019.

Opponents of the law, who had gathered nearby by a giant model foetus that is their trademark, dispersed quickly after the result emerged, with one man occasionally shouting the word “Murderers!” towards the pro-choice side.

Karina Marolla, a 49-year-old opponent of the law, said: “What was voted for today is the death penalty for the most innocent. Today in Argentina there’s no law giving the death penalty to rapists or murderers. So, we’re feeling sad, to put it lightly.”