Belize Crime Observatory confirms murders down by a quarter in 2020

Seven more Belizeans die from COVID-19, Ministry of Health and Wellness pleads with the public to follow prevention protocols

National Gas Company Limited: A Public-Private Partnership and a unique model for national development and self sufficiency 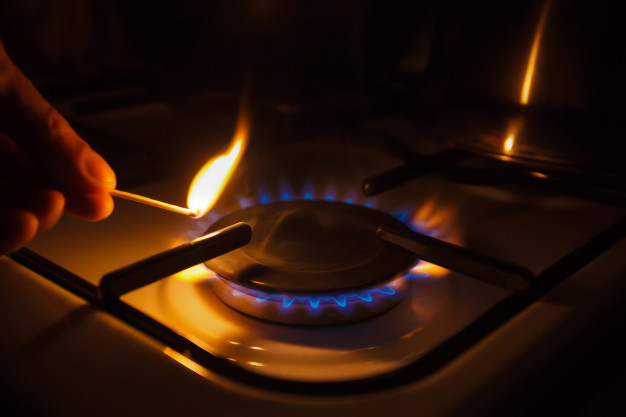 By BBN Staff: The National Gas Company Limited (NGC), situated at the Port of Big Creek in the Stann Creek District, Belmopan and Orange Walk,  was conceptualized in response to Belize’s need for competitively and transparently priced LPG that met the national standards for quality and safety. Thus far, since the start of operations in May of 2020, NGC has managed to reduce the prices of LPG to Belizean consumers as compared to previous imported prices.

NGC is a Public Private Partnership (PPP) between the Government of Belize (GOB) and Belize’s private sector whose establishment filled a critical need for a rapidly modernizing country that was dependent on its neighbors, including Guatemala, for a critical commodity 39 years after independence. Although the model is new to the country of Belize, it is uncomplicated and deeply impacting. Basically, Belizean citizens in the private sector collaborated with the government to design, pay for, build and operate a modern state of the art Marine Terminal and inland distribution system. After 15 years, 100% of the ownership of NGC reverted to the Government of Belize. Although Belizean companies participated, 72% of project financing came by way of participation from commercial banks and the Inter-American Development Bank. The remainder of the money came from Belizean Pension Funds, Belizeans Credit Unions and other Belizean institutional investors. In other words, Belizeans, through their credit unions and pension funds have a stake in NGC.

Despite the current 25% government ownership, NGC pays environmental taxes.  Additionally NGC contributes by hiring Belizean citizens at all levels, many of whom have years of knowledge in the oil and gas industry.

In Belize, LPG is commonly called ‘Butane’ – yet, its chemical composition, is actually a combination of butane and propane. Butane burns hotter because its energy content is higher and is safer to store and handle because its vapor pressure is lower than propane. In Belize, the law requires 70% propane to 30% butane in the LPG mix.  Without LPG, the average Belizean cannot cook, ( 83% of homes in Belize use LPG) or in many cases move around if they use LPG as carburation gas. It is important to point out that for vehicular transportation LPG is cleaner than gasoline or diesel.

However, there was a time when the majority of Belize’s LPG supply was sourced through Central America. Eventually, 93% of it came through Guatemala. It was transported to Belize via foreign trucks with foreign drivers. One family, divided into three branches, controlled every aspect of the business from top to bottom. As a result, prices could be easily manipulated and important safety concerns could be ignored to the detriment of the Belizean consumer, economy and ultimately to Belize.

Because of NGC, there is a direct transport connection between Belize and the primary source of LPG in the Gulf Coast of the United States. By establishing a state-of-the-art terminal facility, and inland distribution depots, wholesale buyers at a price regulated by the Government of Belize could access the least expensive LPG available in the market. It is important to understand that NGC is prevented by law from selling retail. NGC can only sell to wholesalers who then sell it to the Belizean consumer. At the time of this article’s publication, NGC’s wholesale price was under $70.00 Belize dollars for the 100 lb cylinder and the retail price as established by the Belize Bureau of Standards was upward of $100.00. In other words, the wholesale price as made available by NGC to the country of Belize was very inexpensive.  The switch from overland to bulk marine imports of LPG allowed NGC to not only slash the wholesale prices of LPG significantly, but it also allowed for the hiring of more Belizeans!

Along with revamping the importation methods, NGC also moved towards quality control in order to ensure that Belizeans are receiving the quality of gas that they are paying for. Before NGC was established, there were no industry acceptable quality control methods for the constant importation of LPG in bowsers. The establishment of a 60 million dollar state of the art facility proudly paid for by Belizeans, allows the country of Belize to automate, store and quality control LPG like never before.  The facilities developed by NGC are built to the National Fire Protection standard called the NFPA code 58 which is specifically employed for Liquefied Petroleum Gas.

This begs two questions: before NGC, did we really know what we were getting in our butane tanks? In fact, before NGC, Belize was the only country in the region without a Marine Gas Terminal of its own. The other question on everyone’s mind is, “Why are LPG prices still high?” Below is an infographic using information published by the Statistical Institute of Belize, that details the prices for LPG over the years. It clearly shows the effect of NGC on wholesale prices, and as promised by the project those prices are low.  Readers will note that the wholesale price as landed and distributed to wholesalers by NGC, who are in some cases a few minutes away from your house, is very inexpensive. With over 30 retailers in Belize, the Belize Business Bureau of Standards dictates the retail costs of LPG. The NGC does not determine retail prices. 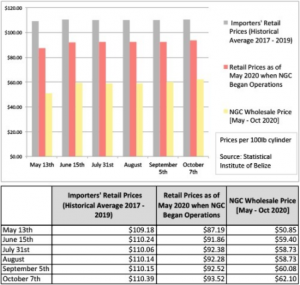 In these perilous times of Covid-19 and Climate Change, Belize must continue moving towards being more self-reliant.  The NGC project, and development model is a solid move toward self-sufficiency and a lasting benefit to Belizeans for generations to come.