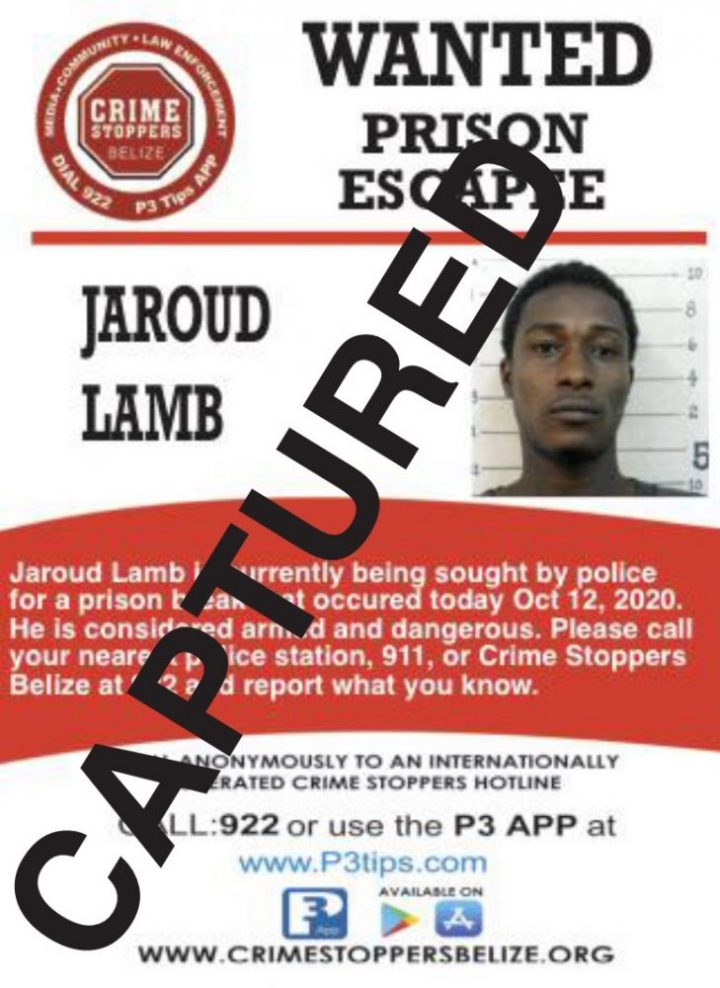 By Aaron Humes: The fate of the three escapees from the Central Prison that were yet to be recaptured at the turn of the year seems to have faded from most memories, but not those of the prison or Police.

And one of those escapees, Jaroud Lamb Arthurs, was snared on Saturday morning in the area of Ontario Village, Cayo District.

Lamb, 33, was found based on police intelligence according to ACP Joseph Myvette, head of National Crimes Investigation Branch: “They [Police] were conducting searches in a bushy area off the highway in Ontario Village where they observed escaped prisoner Jaroud Lamb hiding in some bushes. As a result, police shouted at him and he then attempted to make good his escape where a single shot was fired towards his direction which caught him in his left calf and as a result he was then captured and transported to the Western Regional Hospital and later to the Karl Heusner Memorial Hospital where he remains under police guard.”

But a family member who accompanied Lamb to the hospital disputes that account, stating that Lamb was not resisting arrest when police fired on him, and that officers left him in the back of the pick-up truck at the station for approximately 30 to 45 minutes before taking him to hospital to get his wound treated.

Among other things, the officers taunted Lamb, saying that he couldn’t run anymore and that they would have killed him, but too many witnesses were around. What’s more, Lamb’s family suggested that prison authorities wanted him back right away even as he awaits surgery and needs blood.

ACP Myvette, questioned on the allegations, said that as to whether Lamb was or was not resisting arrest, it was his story versus the officers. He professed not to be aware of the allegation that Lamb was delayed getting to hospital, and that his medical issues will be sorted out at the hospital before he goes back to prison.

Lamb was serving hard time for the June 2013 murder that happened during a robbery at La Choza Bar in Las Flores, Belmopan.

Compatriots Michael Faux and Erwin Lanza are the last men standing from the prison escape. ACP Myvette confirmed that police are following up intelligence that the men were traveling together, but offered no other details.