American tourist released after being picked up for improper mask-wearing 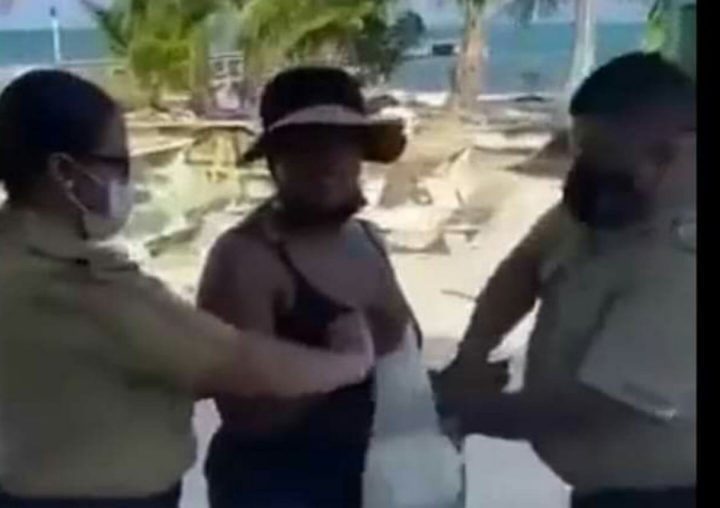 By Aaron Humes: An American female tourist was left with a sour impression of Belize after being detained on the island of Caye Caulker this afternoon for alleged violations of COVID-19 regulations.

Police Commissioner Chester Williams had to intervene, stating tonight on social media, “Yes, the officers erred as if the lady was eating, which in fact she had something in her hand that was she eating, then the officers overreact[ed]. The lady should not have been arrested [and] as such I had directed [Superintendent of Police Christopher] Noble to have [her] released.” (Superintendent Noble is officer commanding the Coastal Executive Division which includes Caye Caulker and San Pedro Town).

The incident was captured on video, in which the woman repeatedly explains to the officers that she properly read the laws before coming to Belize and as such was not violating them by eating with her mask down as she walked down the street. She also complained that she had a medical condition which makes her use of masks limited. The officers, a male and female, arrested and handcuffed her anyway and took her by golf cart to the Caye Caulker Police Station a few blocks away from where the incident took place, which appears to be the public beach on the main street in the village.

Eating outdoors, particularly at restaurants, is one of the few exceptions to the mandate to wear masks under the Quarantine Regulations.

There has been outrage on social media with fears that the incident could further hurt Belizean tourism.