Sadie Vernon tablet theft may be “inside job;” one arrest as majority recovered 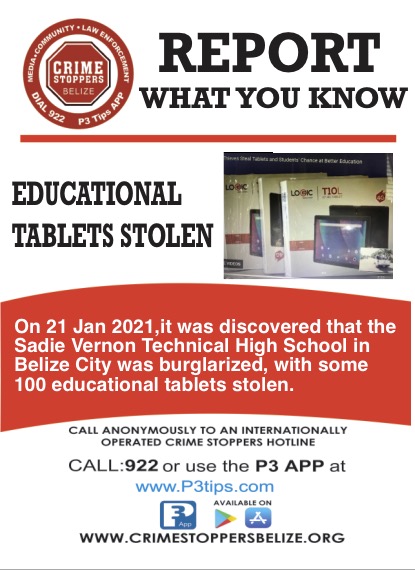 By Aaron Humes: One person has been arrested for handling stolen goods and others are suspected of the theft of 96 Logic tablet devices from the compound of Sadie Vernon Technical High School on Partridge Street last week.

Police were called on the burglary on Thursday morning, placing the time of the theft sometime on Wednesday, according to Assistant Superintendent of Police Alejandro Cowo of the Eastern Division Crimes Investigation Branch.

The arrestee has been identified as one Lina Gabourel, from whom three of the tablets were recovered. A total of 56 tablets have been recovered – 16 were found at an abandoned house and 35 were stashed elsewhere on the compound to be removed later.

The burglary was captured on police surveillance cameras, which showed as many as five persons getting in and out of the school compound, carrying bags that police suspect contained the tablets. After questioning the security guard police believe the culprits got inside help to find the room where the tablets were stored – they had only just been taken to the school for storage.

Police believe the burglars still have the remaining 40 tablets. ASP Cowo warned today: “…if anybody goes out there trying to sell you one of these tablets, … do not purchase it, and instead, call the Police. We know that this will really put a hard knock on the school, as we know these devices were given to the high school for some of the students that cannot afford to buy one of the devices.”

The suspects, Cowo says, hail from the area immediately surrounding the school, and police are looking for them.