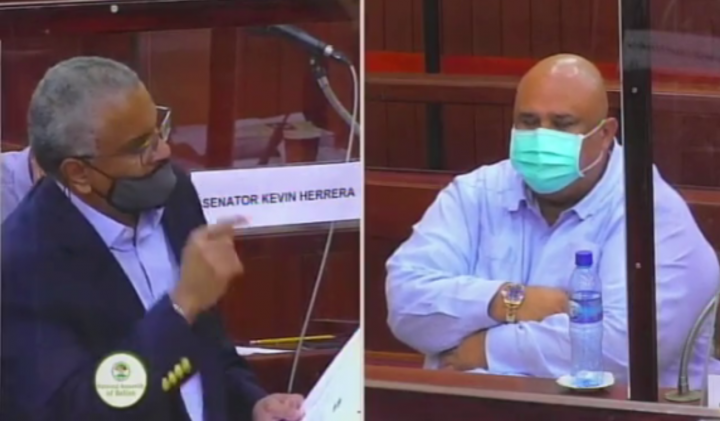 By Aaron Humes: Leader of Government Business, Senator Eamon Courtenay, blew the denials of former Attorney General Michael Peyrefitte of knowledge of a debt-for-nature swap plan out of the water in wrapping up today’s Senate debate.

Courtenay (who at times served as attorney for the Belize Bank Limited, among others, during the years-long Ashcroft saga) first reminded the chamber that in the judgment of the Caribbean Court of Justice (CCJ) in 2017, the former Prime Minister and the former Attorney General (Wilfred Elrington) no longer defended the BCB claim after taking office in 2008; their attorney Magalie Perdomo took no part in the Court of Appeal case, and then-Senior Counsel (now CCJ judge) Denys Barrow conceded that “the Executive could properly have entered into the promissory note without prior legislative approval,” which concession was confirmed by Government counsel Anthony Astaphan, Senior Counsel, at CCJ level.

Then, he cited an August 31, 2020 diplomatic note between the Belize Ministry of Foreign Affairs and its counterpart in the United States, in which the former presented the countersigned International Development Finance Corporation Support to Private Investment and Marine Conservation in Belize Agreement, by the provision of a transaction arranged with a redacted name, in the form of political risk insurance via an insurance contract. The note explained that this “offers a meaningful development alternative for Belize,” and goes on with more diplomatically couched and congratulatory language; the agreement was signed by the former Prime Minister on August 25, six days earlier.

“They come with the pretense – ‘but you never consult we; you never tell we’ – you did it! You were involved in it; your Government was the one who signed it – and I am coming to you with the WhatsApp shortly. Madam President, we are dealing with a debt crisis in this country. The United Democratic Party started these negotiations; they came here pretending that they didn’t know what we are talking about – I want to quote Senator Peyrefitte, ‘absolutely and utterly false’ that it happened under the UDP – well this is Dean Oliver Barrow, Prime Minister,” Courtenay thundered.

He went on to cite the messages, which refer to an A.G. and read one message to an unnamed CEO from a representative of the organization, in which the CEO affirms that he is ‘pushing’ the Minister to get the ratification before the election; a second in which the contact agrees to talk to the unnamed Minister for an update from the A.G. – who could only have been Peyrefitte – concerning the issue of ratification because the international representative wanted to introduce the new deal lead as the former one was leaving; and a third in which the contact made clear that it was unlikely to happen before the end of the UDP’s term – elections would be called a few weeks later.

The PUP is simply taking up the UDP’s ball and running with it, said Courtenay, completing the negotiations and ensuring that the ratification will not have retroactive effect, to satisfy the concerns of the social partners who raised various questions during their turn at debate.