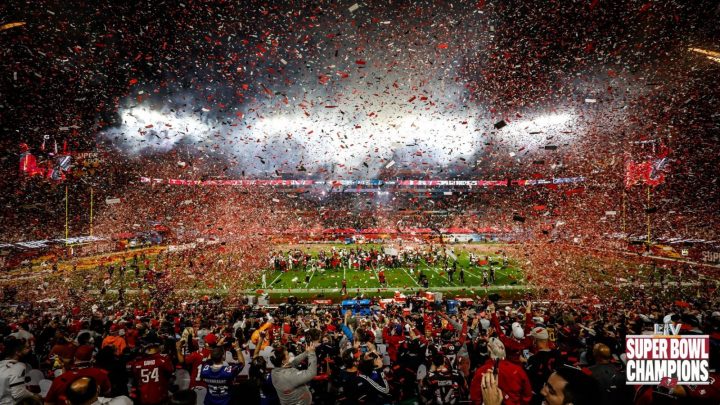 By Aaron Humes: Quarterback Tom Brady threw for three touchdown passes and the Tampa Bay Buccaneers’ defense did the rest as they stifled the Kansas City Chiefs in the comfort of their home, Raymond James Stadium by a score of 31 to nine in tonight’s Super Bowl 55 (LV in Roman numerals).

It is his seventh overall title – remarkably, more than any single National Football League (NFL) franchise, never mind player – and a first for sixth-season Belizean nose tackle Rakeem Nunez-Roches, though his defensive skills could not be displayed as he did not play tonight.

Nonetheless, the Belize Tourism Board (BTB) wasted no time offering both men an expenses-paid vacation (no mention of COVID-19 tests unless the pair get vaccinated). They tweeted to Nunez-Roches, “Hey The Belizean Beast @RakeemNunez, after the #BigGame wouldn’t it be cool for you to relax and maybe play some beach football with the GOAT @TomBrady in your hometown #Belize? On behalf of the Belize Tourism Board we invite both of you to a much-deserved vacation on us!”

Maybe coming to Belize will become the new Super Bowl tradition, ala Disney’s classic “I’m going to Disney World!” campaign that ran for many years. But it may be a while before either man checks their Twitter account as they take stock of a routine, yet incredible victory, and may be celebrating long into the night and tomorrow.

They would combine for another in the second as the Chiefs gave up eight penalties, most on defense.

Separate pass interference calls led to the third score of the game to Antonio Brown, and running back Leonard Fournette powered in a fourth.

Patrick Mahomes threw two interceptions and was repeatedly sacked and hurried as the usually assured Chiefs looked rattled, giving up ten penalties, most on defense. They were held to three field goals as Tampa Bay’s pressure never let up, even on the final drive when a desperate final pass was tipped away and intercepted.

Television commentators suggested the Buccaneers had put the lie to the claim that Florida is the place to retire, with several of the team’s key pieces having come from differing situations.

Now they all enjoy a first Super Bowl title for the franchise since 2002, and look ahead to a 2021 season that will include a visit to Brady’s old stomping ground in New England.

The League, meanwhile, concludes a mostly successful season with a few cases of COVID-19 recorded that hampered scheduling at various points. It resumes in August and September of this year.