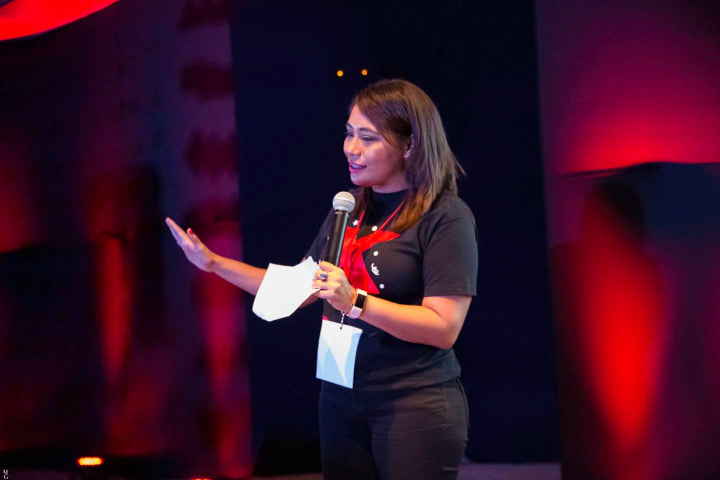 By Aaron Humes: She was appointed chief executive officer of the Ministry of Foreign Affairs, Foreign Trade and Immigration not long after the November general elections, but Amalia Mai, long-time CEO of Great Belize Productions Limited, only just stepped down from that post on Tuesday.

As announced by Channel 5 News at the top of its Tuesday night newscast, Mai’s dual role as CEO and News Director will now be split between two women, one a long-time employee of the station and the other returning. Marleni Cuellar, lead News 5 Live and Open Your Eyes anchor, becomes CEO, while Karla Heusner returns as News Director.

Heusner’s first assignment was to interview her new boss as well as the outgoing one.

Mai got her start in journalism in the 1980s, with credits including editor of Brukdown Magazine, founded by later Channel 5 Managing Director Stewart Krohn, and editor of People’s United Party organ, The Belize Times. She succeeded Krohn as CEO in 2008 after a lengthy stint in the diplomatic service, and set to work creating new programming for the station, including Open Your Eyes, arts and entertainment competitions including a revived Karaoke Television (KTV), and reality programs Great Belize Cooking, The Belize Apprentice, and the popular From Yes to I Do. The flagship News 5 Live regularly won awards by the Caribbean Broadcasting Union (CBU) on which board Mai also served.

In her exit interview, Mai lauded the “great satisfaction” of leading a station with one early evening newscast aired five times a week except for holidays to break ceilings, dominating in the Caribbean region and also winning awards elsewhere, while noting that “traditional broadcast journalism is no longer the same. We have had to look at other areas where we can still continue the work, streaming services for example, digital. That is the way forward now.” She also gave thanks to her staff and board of directors, which persevered through standoffs with the Dean Barrow government and more recently, COVID-19-related decreases in advertising and increases in restrictions on news coverage.

As for Cuellar, who joined the station in 2006, she notes that she ascends to the top post after working on Coney Drive for roughly half of the station’s life. She agrees with Mai that the way forward is moving away, ever so slightly, from traditional presentation: “The way we communicate, and the way we get our information has changed dramatically. And we are starting to see our viewers and people who follow our programs demand that more and more. It’s ensuring that we still reach our viewers, our audience that are reliant on traditional broadcasting, but also ensuring that we are prepared for the next phase that we know is to come.”

Breaking Belize News extends its best wishes and congratulations to all involved.