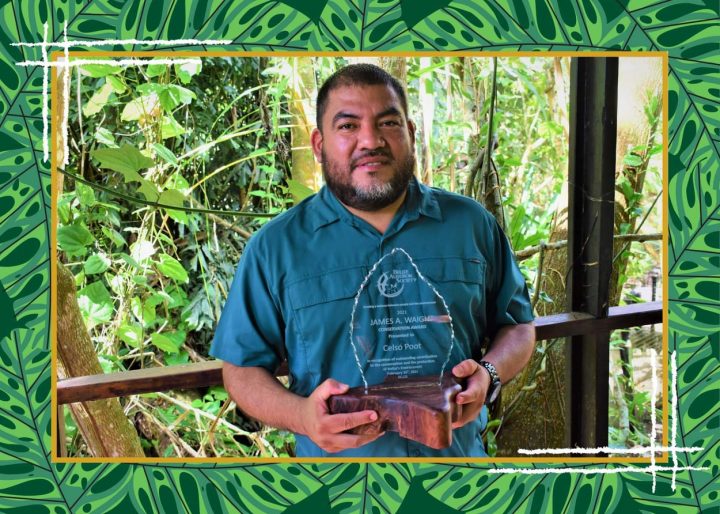 By BBN Staff: Operations Manager of The Belize Zoo and founder of The Belize Tapir Project, Celso Poot was honored with the prestigious James A. Waight Award for conservation.

Poot received the award at a virtual ceremony on Tuesday February 16, 2021.

The award, which is presented by Belize Audubon Society (BAS) in memory of the founding member and the Society’s first president, James A. Waight, celebrates outstanding work in the protection and enhancement of Belize’s natural environment.

Poot is the 35th recipient of the award. The award was presented to him by BAS’ Environmental Education & Communications Director, Dareece Chuc.

Poot was nominated for the award by his colleague and friend, Jamal Andrewin-Bohn, who highlighted Poot’s long career in conservation, both through his work in education and management at The Belize Zoo, and his groundbreaking research work and conservation of the Central American Tapir through the Belize Tapir Project.

In 1995, his career started as an Environmental Educator at The Belize Zoo and Tropical Education Centre.

Poot later transitioned to Education Director where he developed environmental education programs that have impacted thousands of Belizeans and visitors.

Inspired by many years of hosting April the Tapir’s birthday celebrations at the zoo, in 2008 Poot began monitoring tapir fatalities on the Burrell Boom road.

In the years to follow, his work would include raising awareness with motorists on tapir collisions and lobbying the government for the placement of ‘Tapir Crossing’ signs on the Burrell Boom road, resulting in reduced tapir deaths.

His tapir research has been expanded across the country, and Poot has been recognized for this by becoming the country’s focal point for the IUCN Tapir Specialist Group for Belize, and being the recipient of a fellowship to fulfill a PhD in Interdisciplinary Ecology at the University of Florida.

“The James A. Waight Award is something I look forward to annually, to see who’s who in the conservation field in Belize. I’ve been aware of this award for as long as it’s been in existence, and to be among this group of people really is an honor. The recipients of the James A. Waight Award are people who are working from the heart and making change in Belize, and I thank the Belize Audubon Society for selecting me for this prestigious award,” Poot commented.

Executive Director of Belize Audubon Society, Amanda Acosta, said: “We received several extremely strong nominations for the James A. Waight Award this year, and choosing a winner was not an easy decision, but Celso’s entry really stood out for his dedication to educating the Belizean public, the role he has played as a mentor for other aspiring conservationists, and the work he is continuing country-wide to protect our national species, the tapir. On behalf of the BAS staff and Board of Directors, I would like to offer my warm congratulations to Celso and I look forward to seeing what other great work he goes on to achieve in the future.”

BBN joins in congratulating Poot for his contribution to conservation.