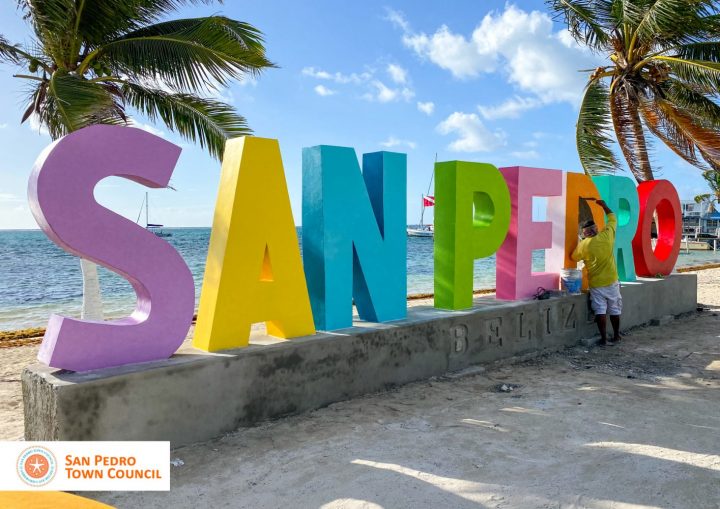 By Aaron Humes: Only a few days before their term is to expire, the San Pedro Town Council has informed residents that the town sign has been painted and is soon to be finished.

The ‘SAN PEDRO’ sign is located in Central Park on Barrier Reef Drive, considered the ‘heart’ of the island town.

The Council said on social media: “SAN PEDRO is in full COLOR! The ‘SAN PEDRO’ sign is almost done as it has received its paint job. Finishing details await for everyone to come and take their picture. The colors were chosen to complement the aesthetic of Central Park.”

Residents who responded to the post had mixed reactions at best, most suggesting they would prefer the money used on the sign to have been used to repair and fix streets.

But that power is in their hands, as whomever they elect next Wednesday, March 3, has that full authority.

There is a United Democratic Party (UDP) slate led by Ruben ‘Rux’ Gonzalez and a People’s United Party slate led by Gualberto “Wally” Nunez. The reds under the retiring Daniel Guerrero narrowly escaped last time with a margin of 38 votes, on average, over their blue rivals.

Similar signs have been erected in each of the municipalities nationwide; Belize City is located on Marine Parade next to Animal Park and the Baron Bliss Lighthouse.