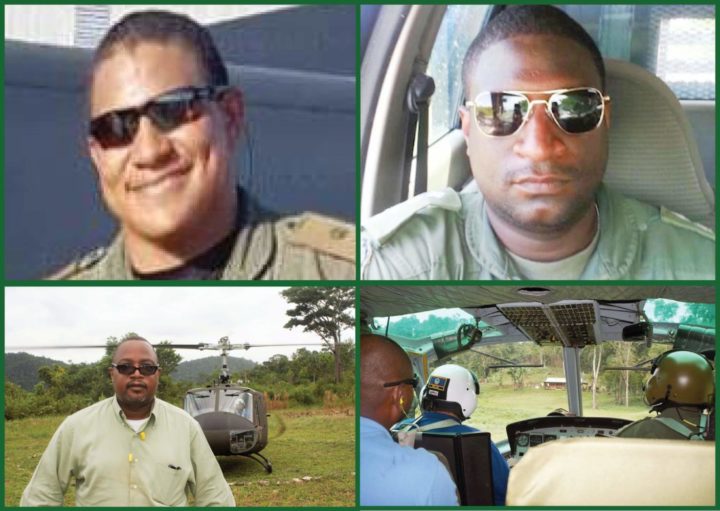 By Aaron Humes: Today is a sombre anniversary for the Belize Defence Force (BDF), which lost four of its own on an anti-drug operation off the Coastal Road after a helicopter crashed into the lagoon.

The crash took the lives of pilots, Majors Radford Baizar and Adran Ramirez and Corporals Yassir Mendez and Reynaldo Choco, as they participated in a sanctioned mission following the landing of a drug plane.

While authorities were celebrating the successful recovery of 70 bales of cocaine, the quartet had gone down in the lagoon after, it is believed, Major Baizar experienced spatial disorientation.

The bodies were retrieved and all Belizeans mourned – then began asking questions.

Why were the men not reported missing until 12 hours later? And not found until 30 hours later? Why were all the communications over WhatsApp in an area with spotty data? Doesn’t the BDF have night-time equipment?

Ultimately, separate investigations were conducted by Honduran and Mexican authorities, the former pointing to pilot error on the part of Major Baizar. But the results of an investigation by Bell, the makers of the Huey helicopter used by the crew, which was announced to have been completed last September by then-CEO of Defense Felix Enriquez, have yet to be made public.

Also, it was believed that charges were to be brought against four other BDF soldiers for a series of derelictions of duty related to the crash, but these too have not moved forward.

Most gallingly, their families have neither closure nor the compensation promised by the former administration, to our knowledge. Then-Minister of National Security Michael Peyrefitte confirmed that the Government was to pay out $100,000 to each family depending on letters confirmed who administers the men’s estates and without admitting liability; however, the attorney representing two of the families, Audrey Matura, told reporters that the courts were unable to hear an application for grant of administration on the basis that none of the men left a will; that is, they died intestate.

Without proof that they administer the estate, said Matura, the money could not and would not be paid out. The then-Minister even vetoed a request for an advance for one of the widows who lived at Price Barracks, BDF headquarters, as a civilian has no right beyond that of their soldier spouse to stay there. The money would have been used to take care of expenses of moving, paying for school and so on.

We have contacted Matura as well as Minister of Home Affairs Kareem Musa for comment, and intend to follow up with others for an update by Monday.

Baizar, Ramirez, Choco and Mendez were specially recognized during last year’s Independence Day ceremony with a tribute in Belmopan. There is no word on whether the anniversary of the crash will be recognized by either the Government or the Force.

We extend our continued sympathies to the families of the deceased; may they rest in peace.