Police detain two for Courts robbery, crime may have been committed with a toy gun 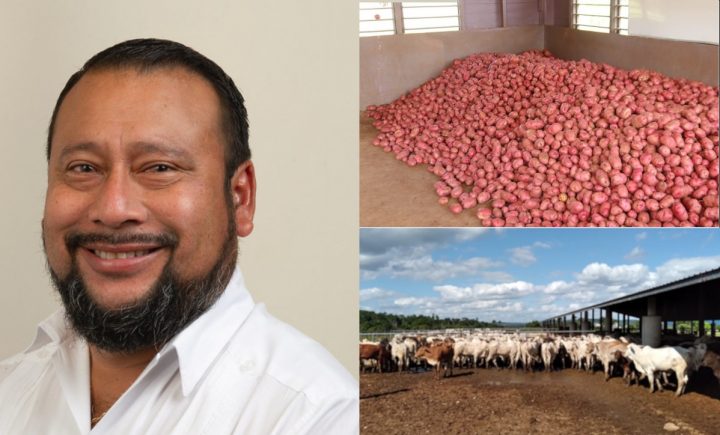 By Hugh O’Brien: The People’s United Party (PUP) won a landslide victory in the general elections held in November 2020, and won every single seat in the rural areas across the length and breadth of Belize. In the first 100 days, the PUP has had its ups and downs, and it is no secret that the new government has struggled with the reigns of some Ministries, particularly dealing with a replacement for the food pantry and COVID-19 relief programs, as well as major, and at times, unjustified terminations in the Transport Ministry.

When it comes to agriculture and food security, however, the new Minister Jose Abelardo Mai, hit the ground blazing, and in the first 100 days already has a number of very positive and tangible results to show.

Only a couple hours after elections, Minister Mai announced the decision to allow the informal trade of cattle to Guatemala to resume. This decision was welcomed by cattle farmers, and while large farmers are benefiting from this decision, it was the only hope for numerous small farmers who do not have the capacity to meet strict and expensive quarantine protocols for formal exports. In 100 days, over 15,000 heads of cattle have been exported to Guatemala, and another 600 plus heads were formally exported to Mexico. Together these newly opened windows for cattle exports, earned approximately $15 million in much needed foreign exchange for Belize, and helped cattle farmers get rid of surplus and older heads of cattle, avoid the pressures for grass and feed in the dry season and helped cattle farmers to not default on their bank loans.

Another positive development was the restructuring of the ‘sugar quotas’ to benefit ‘bona fide’ sugar cane farmers who were unable to deliver their normal quantity of cane last year due to severe drought first, followed by flooding during the growth of the sugar cane plant. From all indications, this year’s sugar crop will be a bumper crop and is expected to surpass 1.3 million tonnes of cane. A large number of ‘bona fide’ farmers are now able to deliver a more adequate quantity of cane, thanks to the intervention of the Ministry of Agriculture.

And the efforts of the staff of the Ministry of Agriculture did not stop there. High on the agenda was to ensure that small farmers who produced carrots, onions and potatoes for 3-5 months in the year, were not punished by greedy importers who conspire with powerful authorities to profit from large scale importations during the same time that local farmers were harvesting these crops. Small farmers in 7 miles, San Antonio, Barton Creek and La Gracia in the Cayo district, as well as farmers from Bomba and other villages in the Belize district, Santa Martha, Guinea Grass and other villages in the Orange Walk district and many onion producers in the Corozal district are benefiting from this initiative to carefully regulate the importation of these vital vegetable crops to allow small farmers to sell their local produce and benefit from their hard work.

While carrot, onion and potato farmers have benefited from the new and enforced import permit policy of the Ministry of Agriculture, farmers producing lettuce, celery, cabbage and numerous other vegetables are also benefiting. Even the dairy farmers, small and large milk and cheese processors across Belize are better able to sell their produce with the renewed support being received from the Ministry. Minister Abelardo Mai has been adamant about reducing the food import bill which currently stands at over $200 million annually.

Following these field visits, the Ministry decided to implement a new program management system, appointing young professionals to lead the various initiatives to develop the agriculture sector. In time for Women’s month beginning March 1st, two (2) young women, Ina Sanchez from San Ignacio was confirmed to be the Research and Development coordinator for the Ministry, and Fay Garnett from Belmopan was assigned the responsibility for the development of non-traditional fruits across the country. They are joined by Teresita Balan, crops specialist in Central Farm, and other young women who are playing an active role in Belize’s agriculture development. Efforts are already underway to further develop the coconut industry in Belize and to expand the cultivation and processing of pineapple, particularly in the Southern Cayo district and the Stann Creek district.

Seedbeds have been established at the various agriculture stations countrywide and are targeting the donation of seedlings to schools and Belizeans in both rural and urban areas who are interested to plant a backyard garden.

The Food Processing lab in Central Farm has already began experimenting with the locally grown varieties of irish potatoes to see which one is best able to produce french fries that will store well under cold storage. If none of these varieties do well under this research initiative, arrangements have been made for new varieties, with french fry potential, to be investigated for planting in Belize.

Newly appointed program manager for livestock and beekeeping, Belarmino Esquivel, has had productive meetings with the pig producers and meat processors in Belize. Together the Ministry and the private sector are targeting the processing of as much hams (port legs), processing of imported green picnics (pork shoulders) and the minimizing the importation of these pork products into Belize, particularly for the Christmas season. In an exclusive interview with BBN, Minister Mai said “the Ministry intends to bring back much needed confidence in the local meat processing sector. We must produce what we consume and consume what we produce”.

While icecream is being exported to Grenada and struggles a bit in this Caribbean market, plans are in place to use the Western Dairies facility in Grenada as a hub for other exports such as chickens, animal feed and coconut oil from Belize. Under the new management of the Ministry, the first shipment of chickens were exported to Mexico in January.

In addition, the Corozal Free Zone has been reopened, creating much needed employment for over 800 employees, and earning much needed foreign exchange for Belize.

According to the CEO in the Ministry of Agriculture, Food Security and Enterprise, Servulo Baeza, he has great confidence in the new program management system recently introduced in the Ministry under his tenure. “It is my belief that the Ministry will be able to optimize the use of the limited financial and other resources allocated to us,” Baeza told BBN.