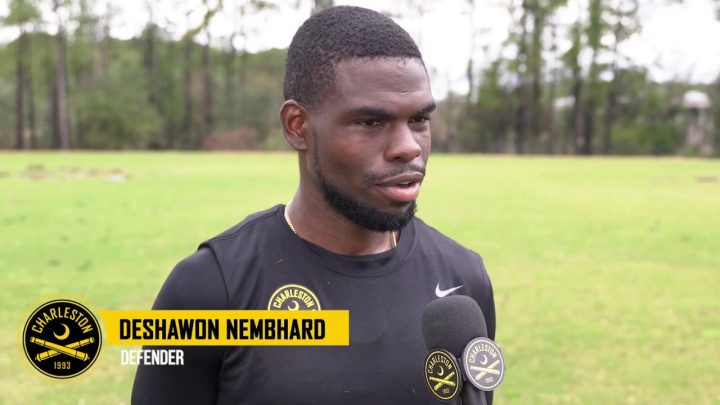 By Ruben Morales Iglesias: Left back Deshawon Nembhard is trying out with the Belize Men’s National Team (BMNT) at the Football Federation of Belize and, so far, he seems to be doing well.

A number of players have already been cut, but Charleston Battery defender is still in Belmopan getting ready for the two FIFA World Cup Qatar 2022 qualifiers at the end of the month.

According to a video posted by the FFB on Facebook Nembhard said: “Football has thought me a lot if not everything in life.”

He is one of ten foreign-based players called by BMNT coach Dale Pelayo is using for the two matches at the end of the month.

Belize is in Group E in CONCACAF qualifiers along with Haiti, Nicaragua, Saint Lucia, and Turks and Caicos Islands and will be playing against Haiti at Port au Prince on Thursday, March 25, 2021, and against Turks and Caicos at Santo Domingo, Dominican Republic, on Tuesday, March 30, 2021.

In the FFB’s video highlight, Nembhard says he is from Corozal Town,

“Left from Belize when I was five, moved to Dallas, Texas. I lived with my mom and my stepdad,” Nembhard said. “I’ve been playing football there since I was eight for the same club team from the age of 8 to 18. I ended attending Florida International University in Miami, spent four years there, graduated with a degree in Economics. From there I left and then ended up playing professional football. In my most recent season, I played with Charleston Battery in Charleston South Carolina. I’ve loved football since I was small. I guess it kind of runs in the family. My mom grew up with five brothers, so I was always kind of around sports. Even before I left Belize I was around football. My dad played goalkeeper for Yabra back in the day. So, I guess, it’s just been a family thing. I’ve just always been around football and I’ve loved it ever since I could remember, honestly.”

In 2013 Nembhard played for Southern Methodist University and a year later moved to Florida International University. Upon graduating he played with Miami City FC in the USL PDL from 2018 to 2020 before moving to the Charleston Battery of the United States Soccer League last year in February.

Despite being a footballer, Nembhard said his sports idol was Kobe Bryant.

“Kobe Bryant was always my biggest inspiration growing up when it comes to sports,” Nembhard said. “Just his mentality and the way he approached the game and just life in general. I guess in football you could say Steven Gerrard was always my favorite player. He was going that really kind of cultivated my love for football, even more, to make me want to pursue it. But, in general, it would say Kobe Bryant is my biggest, biggest sports inspiration. Kind of really pushed me with the sport and try to become professional.”

At 26, this is the first time Nembhard has been called to the BMNT.  He said he plays football like it were his last game.

“My coach told me once, well not just me but the team, to treat every pass, every shot, every touch like it’s your last because at the end of the day football isn’t forever. Father time defeats all,” Nembhard said. “Every time you step out on the field, just to treat it like it could be your last time.  I think that’s really what stuck with me and that’s really what has pushed me to have a mentality when I step on the training pitch to give it everything.”

The last ten minutes of a game are crucial he said: “That last ten minute is when the fatigue starts to set in so you really have to concentrate on what you’re doing. Once fatigue kicks in, it’s hard to concentrate and to focus on your job. So, that’s really when you want to start to lock in on your responsibility on the pitch and make sure you do what you have to do and also try to motivate everybody else to kind of bring them over the line, as well, because football is a team effort. So even if you do your job, you have to make sure everybody else is doing their job as well. I would say just, really, once that fatigue starts to kick in, you have to start to concentrate on your technique, your breathing, and those things and your responsibility ’cause it kind of tends to leave you in those last 10 minutes.”

After college, he took coaching for a while.

“I always tell people and there was a spell when I was coaching as well right after college and I told my players that football has taught me a lot, if not everything about life when it comes to sacrifice, teamwork, being there for one another, dedication, everything,” Nembhard said. “So, if I’m being honest, football has really taught me a lot. I haven’t always had a male figure in my life. I can say that football has definitely been there for me and kind of been that replacement in teaching me and showing me, you know, the dedication and sacrificing teamwork.”

As to the BMNT, Nembhard says that the team is intent on making a good showing in the WC qualifiers.

“I think the end goal is to make Belize proud, make the country proud. I think everybody has that in mind,” Nembhard said. “I think right now that’s what we’re focused on and hopefully we can go to these qualifiers and, you know, make some waves and achieve something, have something to show for the work that we’re putting in right now because we’re working very hard.”