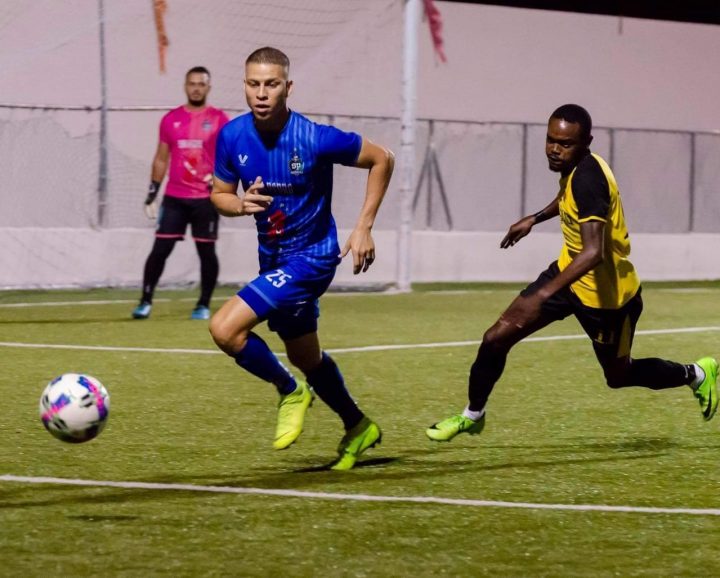 By Ruben Morales Iglesias, Belize City: “As soon as that whistle is blown, all that nervousness is drawn away, I just stick to the pitch. Everything is just football for that 90+ minutes,” Asrel Sutherland said to FFB’s Communications and Marketing Manager Yashmin Juan who is responsible for the FFB Facebook videos featuring the players of the Belize Men’s National Team (BMNT).

The Asrel Kimmani Sutherland video was posted today, coincidentally as he turns 28 having been born on March 8, 1993, in Corozal. The Belize Men’s National Team defender currently is a San Pedro Pirates player but prior to 2018, he suited up for Police United.

He was first called to the National A Team in 2018 and played that same year in a match against Barbados here on April 8. Other than that, he’s played international games for the U-21 National Team and in the Premier League of Belize for Police United against the likes of Pachuca from Mexico and Olimpia from Honduras. With the U-21 he played against Honduras, El Salvador, and Nicaragua.

“I think the message I want to bring to all Belizeans is, you know, many people have the tendency to break down certain players, but I think that we’ve just got to start having trust in the players, in the coaching staff, and everyone. I think with the support of all Belizeans, we’re pretty fine,” Sutherland said in the FFB post.

Sutherland thinks the BMNT, which is preparing for the upcoming FIFA World Cup Qatar 2022 qualifiers at the end of the month, is doing well: “I think I see (that) the team is very strong with a mixture of younger players and older players. With the guidance of the veterans, I think we can move forward from here.”

“At first, football wasn’t something that I liked,” Sutherland said. “To be honest I was always a basketball person, but I grew up in a family where the background was all about football. So, with my dad pushing me always, I diverted more into the sport. In terms of advice, I would definitely go with my mom, because she always used to say, ‘You can have the sport on one side, but also the education is important.’ I had that in the back of my head all the time. If I wanted to play football, I also had to make sure, I’m on the educational level as well.”

“When the whistle is blown, all that nervousness is just drawn away, I just stick to the pitch. Everything is just football for that 90-plus minutes.”

Sutherland said he prays a lot: “I think one of the most powerful things for me has always been prayers. I do prayer before lunch, before bedtime, when I wake up, before every game.”

“As a player, everybody knows that I’m very serious when I’m on the pitch and I try to take advice from senior players and I also have the tendency to listen to even younger players. Not because I may be older than certain players, I may look down at them. No, I look both on senior and younger players alike,” Sutherland said.

The BMNT defender closed off by saying that education is very important to him: “In terms of my personal life, football has always been serious for me, but I had a point in time where I lost both my grandparents in less than a month. It really held me back in education and football-wise. It really had a hard impact on me. I really wasn’t focusing on any more football or education. I was a bit lost for a while. You know I was talking to my parents, my aunts. I got a bit inspired. I have an aunt. She used to always say ‘It’s during the hard times when you will really know where you stand in life because that’s when you will know whether you will fall or whether you will rise.’ So, I took it as a challenge and that was the same time, I got a scholarship from the university and I decided to go back to school finish off university.”