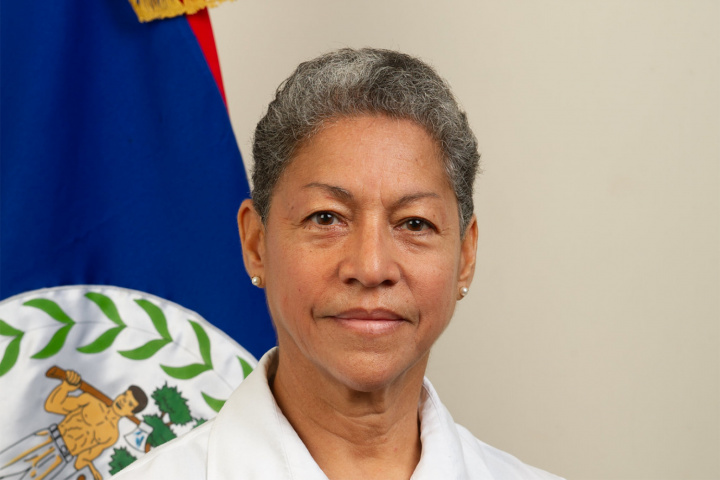 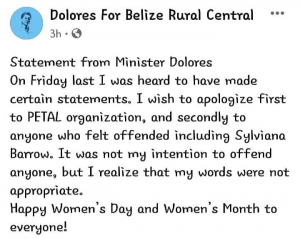 By BBN Staff: Minister of Human Development, Families and Indigenous Peoples Affairs Minister Dolores Balderamos Garcia today apologized on Facebook “to PETAL organization, and secondly to anyone who felt offended including Sylviana Barrow.”

On Saturday, March 6, 2021, the UDP demanded an apology from Balderamos Garcia who reportedly was caught off-guard during a meeting celebrating the 10th anniversary of the LGBT organization PETAL on Friday denigrating the chairwoman of the Hattieville Village Council, Sylvana Barrow, as a “wretch” among other allegations.

Balderamos Garcia’s apology, which was headlined “Statement from Minister Dolores,” said verbatim: “On Friday last I was heard to have made certain statements. I wish to apologize first to PETAL organization, and secondly to anyone who felt offended including Sylviana Barrow. It was not my intention to offend anyone, but I realize that my words were not appropriate. Happy Women’s Day and Women’s Month to everyone!”

The UDP and its women’s organization, the National Organization for Women (NOW), said on Saturday that Garcia’s attack came at an extremely poor time – the celebration of Women’s Month.

The opposition party claimed that partisan motivations are behind the recent reorganization of food assistance and financial assistance, on the basis that Barrow’s senior citizen mother was being questioned as to her bonafides for the program.

With the election season over, the UDP said, it is time for the Belize Rural Central area representative to honor her oath, let go off her partisanship and serve all Belizeans, including Sylvana Barrow, to whom she must apologize.