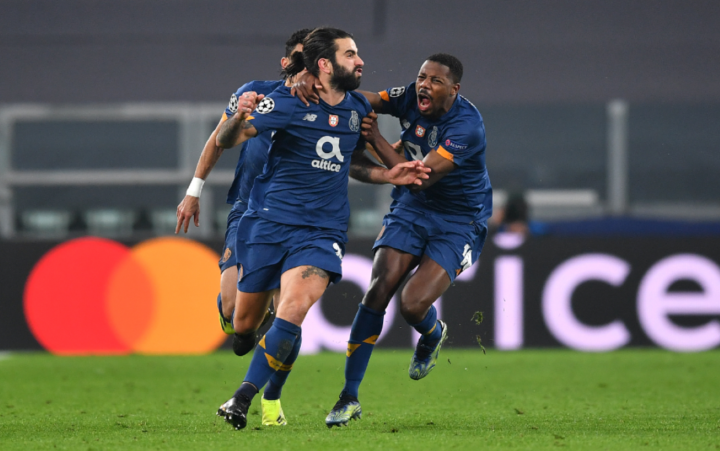 By Rubén Morales Iglesias: Portuguese club Porto eliminate Juventus on away goals in an extremely heated game in Turin, Italy, to qualify to the quarterfinals of the UEFA Champions League.

The hero of the night for Porto was Sergio Oliveira who nailed the Juventus keeper Wojciech Szczesny in the 19th (pk) and 115th minutes. Ronaldo is being blamed for turning his back on the overtime free kick and allowing the ball to pass between his legs.

Porto had the edge going into the game having won their home leg 2-1 two weeks ago.

Today’s game went all the way to the wire with very intense final minutes of overtime after a 2-1 90-minute-lead for Juventus and the aggregate tied at 3-3.

Porto scored in the 115th minute of overtime on a free kick by Sergio Oliveira and celebrated wildly. Oliveira’s long strike broke the deadlock putting Porto in the driver’s seat as Juventus now needed two goals to turn the game around.

And the Italians made the game very exciting when Adrien Rabiot nailed a header to put Juventus ahead 3-2 in the 117’.

But despite the home and away series now tied at 4-4, that was not good enough for the Turin-side since Porto had the edge on away goals. Juventus needed another goal to turn things around. They got close. Oh, so close, but Alvaro Morata and Cristiano Ronaldo just could not get the ball in.

And so, time expired and Porto are on to the quarterfinals where they will match up against German-side Borussia Dortmund who today beat Spain’s Sevilla on a 5-4 aggregate.

Porto are treasuring the moment. It took them 27 years to reach this far again in the UEFA Champions League.

For Juventus and Ronaldo, it must be a frustrating moment. They’re out again at the same point this year.

From the onset, Porto had wasted no time with Oliveira’s goal in the 19th minute.

Juventus got back on goals by Federico Chiesa in the 49th and 63rd to take the lead 2-1 and tied the game 3-3 on aggregate forcing overtime when things really got hot.