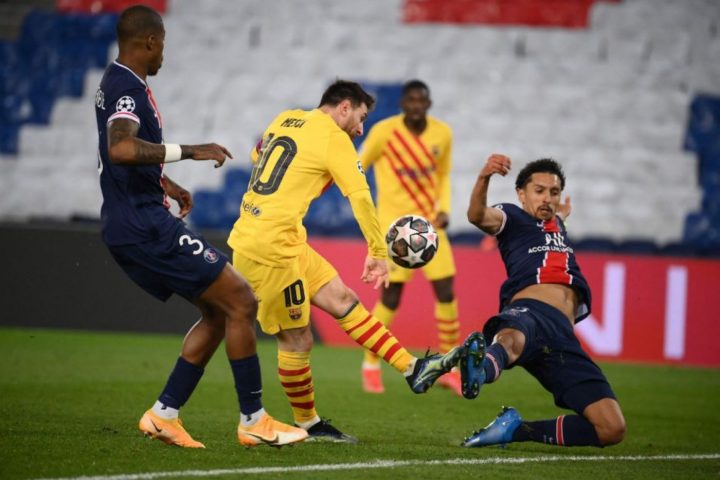 What’s more, this is the first time in 16 years that neither Lionel Messi nor Cristiano Ronaldo are not going to be in the quarterfinals. Last year was the first time in more than a decade that they hadn’t made it to the semifinals. Certainly looks like the end of an era.

Today’s game finished 1-1, at the Parc des Prince, but home standing PSG prevailed on a 5-2 aggregate in the last-16 match in Paris.

Barcelona started out with a siege of the Paris St Germain box but nothing would go in. Lionel Messi and Ousmane Dembélé got chances but Keylor Navas was unbeatable. For all of Barcelona’s efforts, it was PSG who scored first when Kylian Mbappé hit the first one off the penalty spot in the 30th minute after a Cément Lenglet fouled on Mauro Icardi.

Messi responded with a wonder of a goal in the 37th placing the ball in the far corner where Navas could never reach.

In the 45th minute, the referee awarded a penalty kick to Barcelona after a Presnel Kimpembe foul on Antoine Griezmann. Navas guessed right miraculously deflecting Messi’s shot with his left knee and hand. The ball ricocheted off the crossbar and bounced inwards. Icardi, who Barcelona players complained was encroaching when the penalty kick was taken, headed the ball off.

Barcelona nearly scored off the ensuing corner kick, but despite an exceptional showing with numerous chances the half ended 1-1.

PSG were still in the lead by three goals on a 5-2 aggregate at that moment but Mauricio Pochettino’s men were not comfortable as the Spanish side was playing at a high level.

But despite Barcelona’s high-level play in the second half, PSG squared them off and the finished 1-1. PSG move on. Barcelona are out too early.