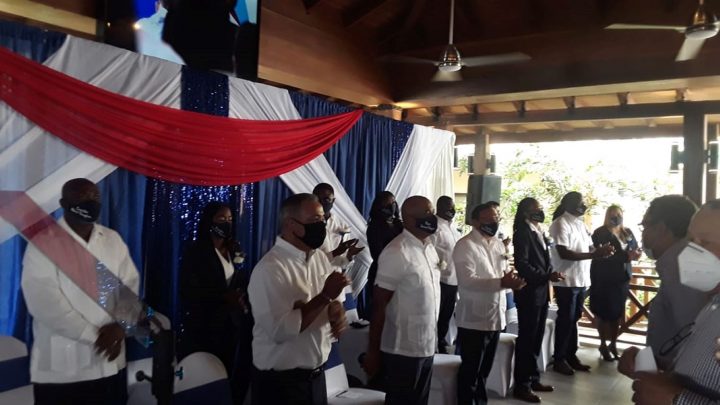 By Aaron Humes: Last week at this hour, the eleven men and women gathered at the Belize Biltmore Plaza Hotel today were awaiting final approval from voters to take up, or continue, their jobs at City Hall.

Having received it, they were sworn in to discharge their duties in the best interest of the residents of the Old Capital and according to the Constitution and the law of Belize and of Belize City.

Usher recalled his charge in 2017 to that grouping of councilors, quoting a poem that spoke of rebuilding people’s hearts with hope and love and thus rebuilding the dreams of our forefathers and our children.

Whether it was restructuring Council finances, attending to streets and drains, developing programs for economic development, or assisting with youth and sports programs, it was “always ‘bout the people,” and that is why, according to Usher, no one was let go during the pandemic and services continued, “punishment” from the-then Central Government of the United Democratic Party notwithstanding.

But “that was then, this is now. And though much was done, much more needs to be done. The needs of the people are even greater because of COVID’s destructive path and the expectations of residents are even higher, but I know well that you and your rejuvenated team are ready,” Usher said, addressing Wagner.

The Prime Minister added that with the wide mandate given them last Wednesday, the team must be humble and never forget their supporters. And he takes it, as well, as a commitment and endorsement of the party’s #planBelize, with which, he instructed, councilors must become familiar as it is their guide to making its precepts reality in the Old Capital.

“This means that you must first help us with our effort in defeating COVID-19 in Belize City. Your efforts should be to help us create jobs in Belize City so that we can get our people back to work so that we can begin the recovery. Here in Belize City, you can start by seeking out available grant funding to help with urban development. These funds are there, but it will require that you work hard to convince our donors to help fund development in flood-prone areas like Belama and Southside Belize City,” Briceno said, adding that he would meet with the municipal leaders in the coming days to brainstorm on projects for municipal development.

Mayor Wagner acknowledged the labor and sacrifice of his first term, but even in the face of adversity, the Council has reached out where it can to those less fortunate, ministered to their needs, and reaped the reward of their confidence and trust in last week’s election results. “Today, we have reason to believe that there are better days ahead. I can never forget, my people, that our success is your success. Our achievements would have never been possible without you,” he said, further assuring that he was ready to collaborate, communicate and establish synergy with the central government, acknowledging that all are elected because the people believe they can work together.

The Council holds its first caucus meeting on Thursday.