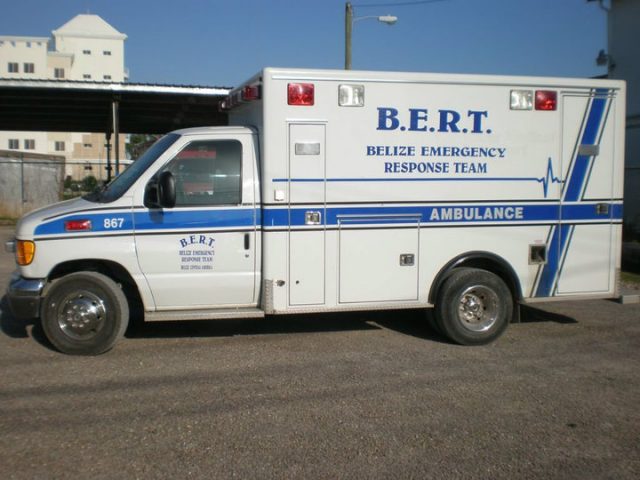 By Aaron Humes: A Belize City family is grieving after their loved one died while waiting for an ambulance.

They blame the Belize Emergency Response Team (BERT) for failing to respond as their name suggests.

A social media video posted by a relative of the deceased explains – with some profanity – that the family, who live on Supaul Street, called 911 twice asking for an ambulance response, with the dispatcher indicating they had reached out to BERT and were told that they would be there in moments.

While family members were trying to keep the patient alive and responsive, the BERT dispatcher called back and began asking questions as to what was wrong with the patient. He also informed that the service charges $20 as a “caution fee” for a response to such incidents.

However, the patient, reportedly obese and apparently suffering breathing problems, was taken to hospital by police officers at the checkpoint and later died.

We have sought out the family and are awaiting their response.

Meanwhile, Director of BERT, Andre Carillo, told us that he had not been aware of the incident and would requisition the call logs for the night in question; he also, through our medium, asked that the family contact him via letter or email to address the incident.

Generally speaking, however, Carillo told us it is not advisable to call 911 directly in emergencies requiring ambulance transport. BERT has a direct line, 223-3292, which is answered by a trained emergency medical technician (EMT) that by protocol must take down patient information and is able to direct what procedures are necessary to stabilize the patient before the ambulance gets there.

Carillo told us that in any emergency, at the first sign of trouble, make sure to call BERT via the direct line right away, as precious minutes may be lost if you go through 911.

Carillo also confirmed that the fee is to help maintain the fleet of ambulances which are mostly donated (some are from the Government) but insisted that BERT would never refuse to carry a patient if they were unable to pay.

We’ll have much more on this story later on, including the travails of emergency services during a pandemic.