Teachers Union warns government: ‘Motorcades are only the beginning’ 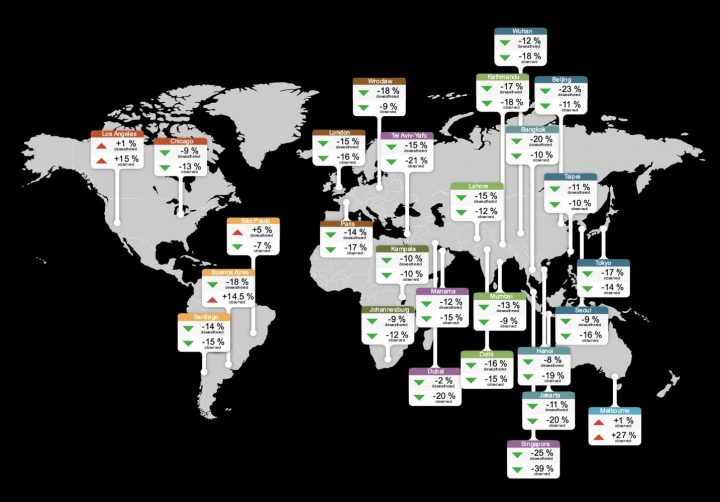 By Rubén Morales Iglesias: The quality of air improved around the world due to COVID-19 lockdowns and social distancing, according to the IQAir 2020 World Air Quality Report, but the levels of air pollution are such that 90 percent of the world’s population is still breathing dangerously high levels of polluted air.

IQAir, a worldwide air quality information company, said that 84 percent of 106 countries polled had improved air quality, but feared that once the pandemic is under control and freedom of movement resumes worldwide that air pollution levels will rise again.

The IQAir report said that pollution is a silent killer.

“Air pollution constitutes the world’s biggest environmental health hazard, contributing to as many as 7 million premature deaths globally per year (more than 3 times higher than deaths associated with COVID-19),” said the IQAir report.

“In 2020, the spread of COVID-19 raised new concerns, as exposure to particle pollution was found to increase vulnerability to the virus and its health impacts,” the report said. “Early reporting suggests that the proportion of COVID-19 deaths attributed to air pollution exposure ranges from 7 to 33 percent.”

The IQAir IQAir 2020 World Air Quality Report said that while air pollution lowered during the pandemic, 84 percent of countries and 65 percent of cities around the world had better air quality than in 2019.

“The most significant air quality improvements were observed during the first lockdown period, when countries around the world mandated relatively strict social distancing measures in an effort to contain the virus,” said the report.

The report said that densely populated cities with a higher average of the microscopic air pollutant PM2.5 had higher reductions of PM2.5.

Cities in Asia, which are very heavily populated and have the highest average levels of PM2.5, reported the best improvements.

“Delhi (-60%), Seoul (-54%) and Wuhan (-44%), for example, all observed substantial drops during their respective lockdown periods as compared to the same time frame in 2019,” the air quality report said. “Los Angeles experienced a PM2.5 reduction of -31% during its lockdown period as well as a record-breaking stretch of air quality that met WHO air quality guidelines.”

China experienced cleaner air in 86 percent of its cities but has 42 cities in the ranking of top 100 most polluted cities in the world.

The IQAir report said that the world’s changing climate is increasing air pollution.

“2020 tied with 2016 as the hottest year on record. At the same time, climate-linked pollution events, such as wildfires and sandstorms, broke records from California and South America to Serbia and Australia.”

The IQAir 2020 World Air Quality Report, which only had gathered data from 106 countries, said “Access to real-time air quality data remains sparse in Africa, Latin America, and West Asia.” But added that “Global air quality monitoring has grown rapidly in recent years. Since 2018, the number of air quality monitoring stations has increased by more than 289 percent, while the number of countries represented by at least one monitor has grown by 33 percent.”