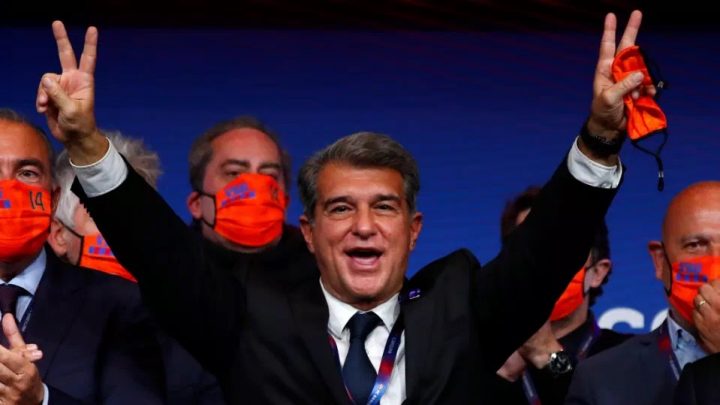 By Rubén Morales Iglesias: Joan Laporta was sworn in as Barcelona’s new president on Wednesday and one of the first things he did in his acceptance speech was to ask Barça’s star player to stay.

“You know the affection I hold for you and we will do whatever it takes to keep you here. You know you cannot leave, Leo,” Laporta said while pointing at Lionel Messi.

Laporta said Barcelona has to regain the ground they’ve lost over the last few years.

“In our first spell we had the best players in Barca history, but if we were successful it was because we had stability,” said Laporta who was president for seven years from 2003 to 2010.

“It is Barcelona’s unity which gives you stability and I invite everyone in Barcelona to think about what they can do for Barca.

“I am here to make decisions. We will, for example, try to convince Leo to stay at the club,” Laporta said to a loud applause.

“Sorry Leo… I will do my best and he knows it! We’re going to try, of course, to convince him to stay here because he’s the best player in history.

“Sorry, but I love you and Barcelona also loves you. If this stadium were full, you wouldn’t want to go.”

“Now we need to do things well. We’ll do what we can so you can be proud of Barcelona again,” he said. “The economic situation is a priority for us.”

“We will not be able to do it alone. As our anthem says, we are strong altogether. More so in these most difficult times. We know how to do it.

“When the pandemic is over our revenue will return. That will be fixed. There will be strong leadership because I am well-accompanied. We will make decisions. To defend the club, you have to live and breathe it and we do that as much as possible.”

Laporta also expressed support for manager Ronald Koeman telling him: “Ronald, you have our confidence. We want to get back to making history in the Champions League, but this year we need to go out and try to win the league title and the Copa del Rey.”

Messi, who joined Barcelona 20 years ago at the age of 13, is being wooed by Manchester City and Paris Saint Germain, but Laporta is said to have already booked Messi’s friend Sergio Agüero in the hopes of making Messi change his mind.

Messi, who attended the inauguration along with his teammates, congratulated Laporta after he was sworn in.

But will Messi stay?

He is accustomed to winning and for now Barcelona has not been doing that. That’s why at the end of the last season, in utter frustration he announced to the club that he wanted out.

But Messi’s move which was widely believed would have been to Manchester City, where he would have joined Agüero and ex-coach Pep Guardiola, was frustrated by much-maligned president Josep María Bartomeu.

Messi took a step back claiming he did not want to end up in court against the club he loved so much but maintained he still wanted out at the end of the season.

Laporta and the other two candidates who participated in the recent elections promised they would do everything in their power to get Messi to stay.

We wait and see.