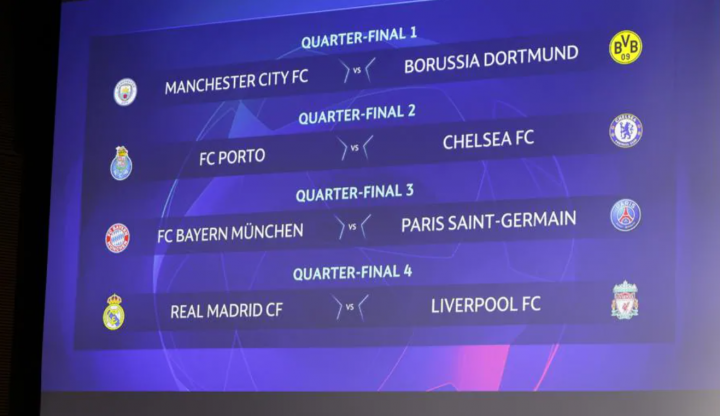 But if we’re looking for drama, Real Madrid facing Liverpool is nothing short of a sensational match-up. The last time they met was in the 2018 final with the Madrid-side prevailing.

The other pairings will have Manchester City matching up against Borussia Dortmund and FC Porto challenging Chelsea.

Bayern Munich defeated PSG 1-0 in last season’s final, so the French are going for vengeance while the Germans are intent on repeating. Makes for a must-see head-on clash.

Madrid are the perennial winners of the Champions League, but this is their first quarterfinals showing since 2018. There is “lots of hunger” midfielder Luka Modric said of Real Madrid’s hopes, but they are facing 2019 winners Liverpool who are extremely combative and are still hurting after losing the 2018 final to the Spanish-side.

Pep Guardiola’s Manchester City want to win their first Champions League but they are taking on Borussia Dortmund who are led by goalscoring machine Erling Haaland, the Norwegian striker who is sought by all the big European clubs.

Portuguese-side FC Porto knocked out Juventus and look to keep impressing when they face a more offensive Chelsea who are now coached by Thomas Tuchel who led PSG to last year’s final.

In the absence of Messi and Ronaldo in the quarterfinals (first time this happens in sixteen years), fans are anticipating a confrontation between Kylian Mbappé and Haaland, the two players most believe are taking the baton from the old guard. And that might happen in the semifinals should both Borussia Dortmund and PSG advance.

The possibility exists of having all-German and all-British semifinals should Bayern and Borussia on one side and Liverpool and Chelsea on the other get past the last 8.

PSG’s Mauricio Pochettino and Chelsea’s Thomas Tuchel are in the hunt for their first title. Pochettino coaching Tottenham Hotspur lost the 2019 final to Liverpool, while Tuchel lost to Bayern last year when he was the manager of PSG.

PSG have never won the Champions League and neither have Manchester City, but the French-side were there last year. And to win it this time around, PSG first have to get past the team that denied last year: Bayern Munich. It seems, City might have an easier route to the Final.

Bayern Munich or Paris Saint-Germain vs. Manchester City or Borussia Dortmund
Real Madrid or Liverpool vs. FC Porto or Chelsea