A celebration of Sharon Matola, nurturer of Belizean wildlife 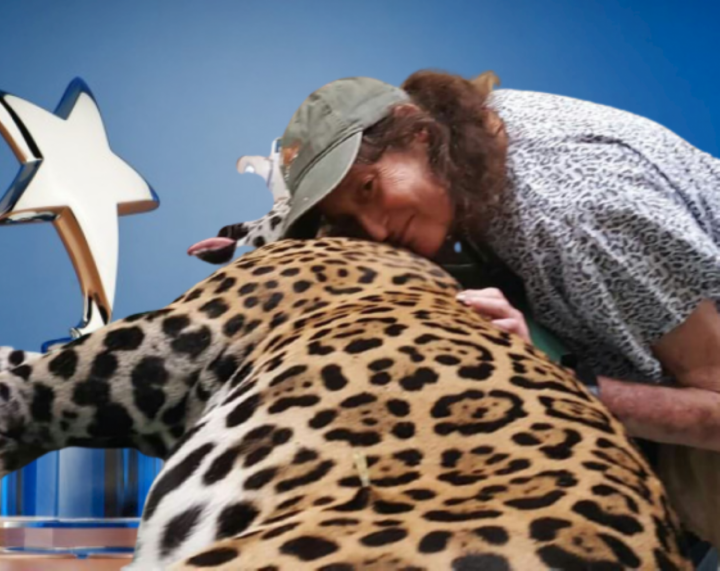 By Aaron Humes: The unexpected passing of founder and director of the Belize Zoo, Sharon Matola, earlier today at the age of 66, brings to a seemingly premature end a colourful life dominated by an appreciation of the animal species with which we share our world.

Over the course of that life, Matola, originally from Baltimore, Maryland, proved difficult to fit in any one box. “Biologist”, “conservationist”, “zookeeper”, “environmentalist”, and “animal lover” were some of her many titles, but even all of them together do not fittingly describe a woman who turned from taming lions in the circus to taking care of mountain lions (“pumas”) and other wild species for a calling, if not necessarily a living.

As you might have guessed, Matola was drawn to animals from childhood, as she explained in a July 2006 online interview with Belizemagazine.com: “I do remember training a squirrel to come and sit on my knee, taking peanuts from my hand. I was seven years old. So, I grew up in the city with the yearning of wanting more nature in my life.”

Her chance came in 1982, wrapped up in the now-almost mythical tale of the founding of the Belize Zoo. As related by Matola from the Belizemagazine.com interview, “I had the opportunity to come to Belize on a temporary job assignment. This was working as a film assistant to Richard Foster (now deceased), a documentary filmmaker in Belize. He needed someone to manage the small collection of wild animals which he used for his wildlife films. … When the documentary film which I was working on with Richard Foster came to a close, there was a severe lack of funds to support the animals which had been used in the film project. Richard was sent to Borneo to complete another documentary there. He left me in charge but there was a call to “get rid of the animals” [by the parent film company based in the UK] due to a shortage of funds to support them. Rather than explore ways to see their exit, I thought, well, Belize doesn’t have a zoo, so I’ll hang up a few signs and let the word out that there is now a place where people can come to view the animals of Belize.”

And the rest, as they say proverbially, is history. The Zoo’s top attraction for many years, April the Tapir, was rescued and nursed to health the following year, and many thousands of visits and animal arrivals later, the Zoo has become the leading animal attraction in all of Belize.

For Matola herself there were other paths: she became a leading opponent of the building of the Chalillo Dam in the early 2000s; she branched off into writing children’s books to support the Zoo, including the “Hoodwink the Owl” series; she wrote regular academic papers on the efforts to conserve such wild species as the scarlet macaw, tapir and jaguar, and built the Tropical Education Center which helps conserve and manage programs for jaguar rehabilitation and harpy eagle restoration.

And she did it all with no Government assistance, but with a permanent smile and in some cases, a guitar.

Witness the testimonies of two separate visitors to the Zoo in 2016 about Matola:

“She shares the stories about how she obtained many of the animals as if she were talking about her adopted children and you can really feel her commitment to their health and well-being not just in the zoo but as species in the wild.”

“I couldn’t think of a more loving mommy to all the creatures. Just seeing her converse, feed and encourage the different animals as she walks down the paths leading to their various hangout spots – it is easy to see how in 1983, there was massive effort to save animals whose purpose was over for some, but still had long lives to enjoy.”

Matola has noted that her personal and professional life are inextricably intertwined. In the 2006 interview she mentioned a brother and sister as well as a niece in the States, but no (human) children of her own, if the many who have visited Mile 30 on the George Price Highway are discounted. Various hobbies include yoga, swimming, weightlifting and other exercise including climbing Victoria Peak six times.

For some years she worked at the regional community pre-school, and was also a radio producer and presenter on environmental issues for the British Forces Broadcasting Service (BFBS) when that organization was established in Ladyville. She was a fan of music (eclectically ranged from classical to pop to rap) and reading (George Orwell’s Animal Farm, E.B. White’s Charlotte’s Web, Harper Lee’s To Kill A Mockingbird, and My Family and Other Animals by Gerald Durrell – you’ll notice the pattern).

And even back in 2006, Matola knew she would die happy about her legacy: “I would like anyone reading this to know that they are reading an interview given by one of the happiest people on the planet. Me. I am so proud of the Belize Zoo and what it has given to so many people, I am reinforced daily about the significant impact this facility has had, for the wildlife of Belize, and for the wonderful people of this extremely special nation. Colour me happy.”

We are happy to have known you, Sharon. Sleep well.

(NOTE: Sharon Matola gave a TEDx talk some years ago in Belmopan about the Belize Zoo which can be found here: https://www.ted.com/talks/sharon_matola_how_to_build_the_best_little_zoo_in_the_world).