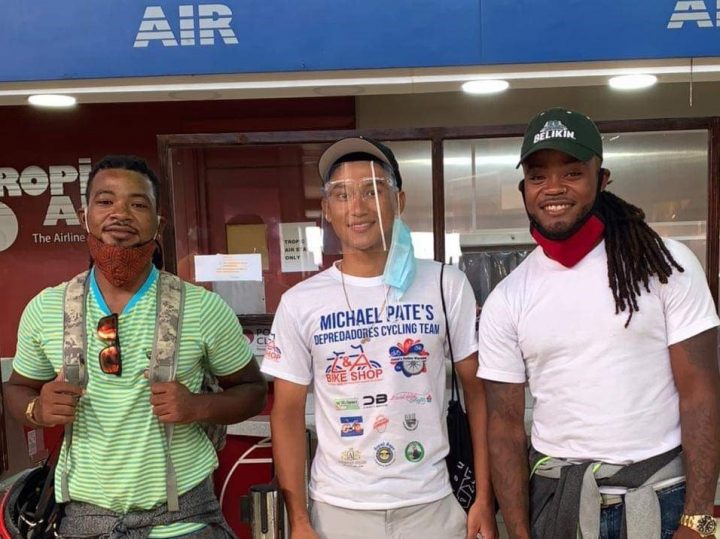 By Rubén Morales Iglesias: A team of three Belizean cyclists left Belize today enroute to Panama to compete in the Clásica RPC Radio Panama stage race. Henry Li and brothers Wasani and Jafari Castro are overnighting in Guatemala City from where they board another flight tomorrow morning at six and arrive in Panama at 9:22 a.m. (8:22 Belize).

Li and the Castros will be competing in the Clásica RPC Radio Panama stage race which starts on Thursday March 25 and finished on Sunday, March 28.

The first stage on Thursday, the Amador Grand Prix, is an 11 km individual time trial on a 3 km course on opening day. The second stage on Friday is the 21 km Amador Labyrinth. On Saturday, it’s the Metro Park – Twilight – a 45 km criterium, 25 laps on a 1.8 km course. The final stage is set for Sunday, the Metro Park – Pope Francis Grand Prix consisting of 82.5 km, 25 laps on a 3.3 km circuit.

The Clásica RPC Radio Panamá four-stage race is for individuals or teams in both men’s and women’s categories. Teams competing should have a minimum of four and maximum of six, so Belize’s trio will not participate in the team competition unless they team up with other riders.

After the races on Sunday, the team will have a rest day on Monday before returning on Tuesday, March 30.

Just two weekends ago, the three riders along with Dwayne Wade and teenager Dion O’Brien competed in a three-stage race near Merida, Mexico. Hao Cheng Lee, brother of Henry Li, who normally helps the cyclists, said that they are trying to form a new team and that they are preparing to ride races in the United States.

“The guys are riding together so they can prepare themselves to race in the US in criteriums in June and July,” Lee said. “We won’t be getting great results at the moment, but by summer we’ll see some better results.” “Our main goal is to build a new team, the three of them, maybe one more. Get some more sponsors and try to get these guys to race in the US a lot more,” Lee said.

Lee added that they are working on new team kit and name, so that they can ride together in the same team jersey because they couldn’t do that in the Mexico race where they rode in different jerseys.