The Belize Jaguars are confident and ready, going all-out against Turks and Caicos Islands today 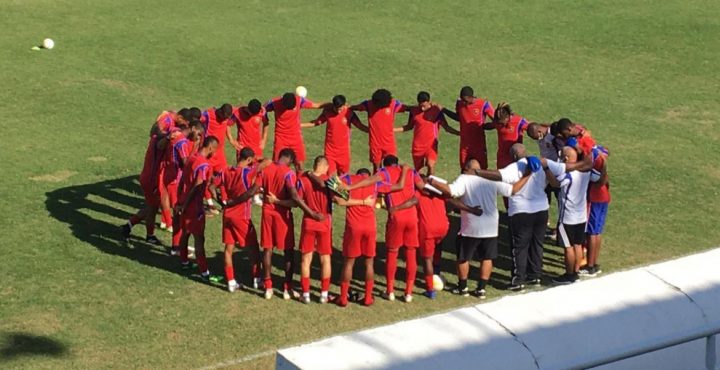 By Rubén Morales Iglesias: “Everybody is pumped up for this game,” Captain Deon Mcaulay said of Tuesday’s World Cup qualifier at 3 p.m. against Turks and Caicos at Estadio Panamericano in San Cristóbal, Dominican Republic.

McCaulay said that they reviewed the Haiti game and the team is ready.

“We went over the last game and saw our mistakes and I think everybody will learn from the last game. We are ready to execute the plan that the coach has for the team. All the players are ready. Everybody is just waiting for game time,” McCaulay added.

National Team Head Coach Dale Pelayo said that they saw they couldn’t watch the Nicaragua-Turks and Caicos match last weekend, but that they saw the highlights of the TCI’s 7-0 loss to Nicaragua plus videos of a previous TCI match.

“The (TCI) team is not disciplined defensively, they gave up a lot of space,” Pelayo said. “We need to take advantage of the space they give up. We need to push as many players in the attack as possible. We are focused. We are going all out.”

Pelayo added that he is making changes to the starting eleven he used against Haiti so that they spread the field and penetrate deep into the TCI defensive line.

“I have made some adjustments in the line-up and I believe the players going out there are capable of doing the job,” he said. “The more opportunities we get the more we will be able to score. Having possession of the ball will give us those opportunities.”

McCaulay again asked for fan support. He said the team needs the entire country to support them and asked for fans to send them motivational social media messages.

“Give us that extending hand that we need out there on the field,” McCaulay said.

Head coach for Turks and Caicos Omar Edwards said the loss to Nicaragua is now a thing of the past, that their objective is now to beat Belize.

“We have a lost a game against Nicaragua on a scoreline that we did not anticipate. That is definitely behind us. Life goes on. The focus and the emphasis is now on the Belize National Team,” Edwards said. “We know for sure that they are going to come and give it their very, very best. We are prepared mentally, physically, and psychologically to go out there and do our best. These games are designed to improve the Turks and Caicos Islands National Team to the fullest. The team is looking forward to embrace the challenge.”

The match starts at three and will be televised locally by TNC, holders of the broadcast rights.