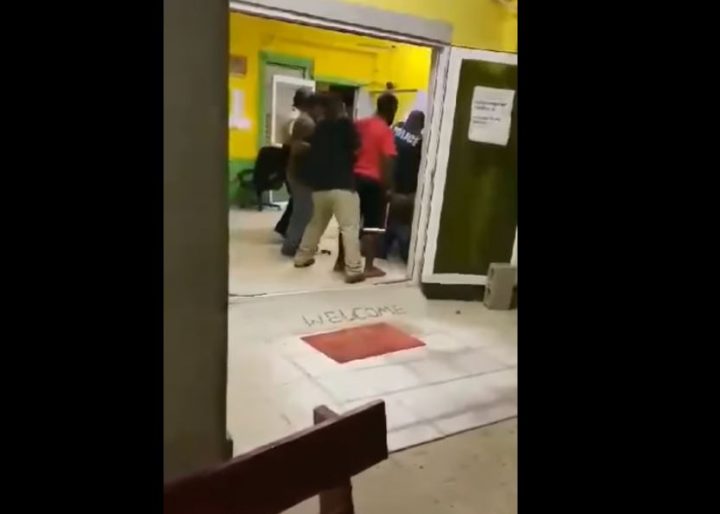 By Benjamin Flowers: Two police officers, P.C. Akeem Gamboa and P.C.Kenrick Gamboa, both brothers, will be facing internal disciplinary charges within the department as well as criminal charges in connection with a brawl that erupted in the Dangriga Police Station earlier today.

Dwayne Sutherland, Officer Commanding the Professional Standards Branch, explained that the officers, who are attached to the Gales Point Manatee Substation, were riding motorcycles while off duty when they came upon other on-duty officers. The on-duty officers believed the Gamboa brothers to be under the influence of either drugs or alcohol and requested a urine sample to confirm their suspicion. When the brothers refused, the on-duty officers took their motorcycles and impounded them at the station.

The Gamboa brothers went to the station around 1:15 a.m. demanding that the motorcycles be returned and a brawl ensued between Akeem Gamboa and Corporal Pech. Kenric Gamboa approached Corporal Pech and restrained him from behind prompting the intervention of several other officers as the brawl ensued.

“Both officers will be charged today with various offenses which include assaulting a police, harm, and they will also be ticketed for violation of the curfew regulations. They will also face numerous internal disciplinary charges…” Sutherland said.

Commissioner of Police Chester Williams commented on the event at a press briefing this morning, stressing that he is disheartened by the situation as the conduct of the officers goes against what the police department is trying to promote. Williams also noted that P.C. Gamboa is a repeat offender and said that he doubts Gamboa is suited for police work.

“If you were to check your archives you would see that PC Gamboa has constantly been a pain in the butt, and something needs to be done. I don’t think his behavior is compatible with that of a police officer’s behavior,” Williams said.

Notably, the Gamboa brothers were charged with grievous harm back in 2017 for assaulting a teenager but were later cleared of those charges.