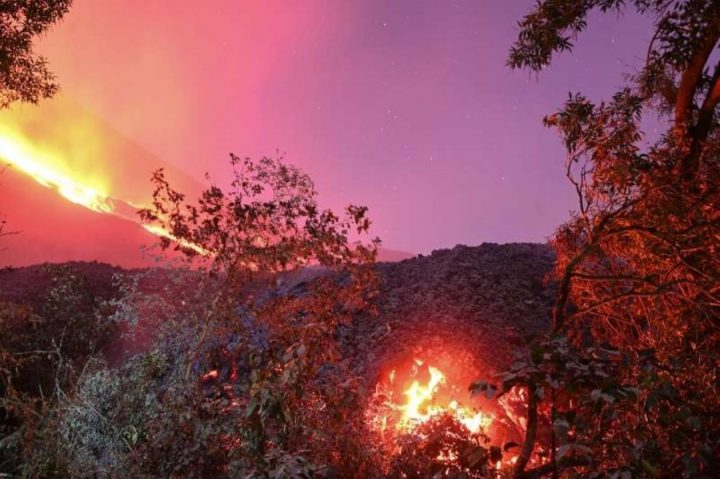 By Rubén Morales Iglesias: Lava flowing from the Guatemala volcano, now in its 56th consecutive day of seismic activity, is destroying agricultural crops mainly coffee and avocado while advancing to nearby communities.

The Guatemalan National Disaster Relief Coordinating agency (Conred) said the extensive lava flow is approaching the communities of El Patrocinio and El Rodeo on the sides of the volcano and is putting 1,800 residents at risk.

Conred further stated that the lava now reaches 1.8 miles down the western side of the volcano.

Guatemalan daily Prensa Libre reported that Conred’s spokesman David de León said the communities on the sides of the volcano have alarm systems that advise the residents when they should evacuate.

The Guatemalan Seismology, Volcanology, Meteorology, and Hydrology Institute (Insivumeh) said late yesterday that lava flow was advancing to a place called la Breña but that the flow advancing to the Campo Alegre farm had stopped. However, the source of the magma was producing seismic tremors.

Insivumeh further stated that these lava flows destroy vegetation and crops as well cut off roads and that flying incandescent blocks can cause burns. Additionally, the gas it gives off can provoke respiratory problems and intoxication if swallowed.

Yesterday the lava flow was about 2.5 miles from the El Rodeo community and its residents were hoping the hills would stop the flow and redirect it away from the village.

Prensa Libre said that videos of the area known as El Playón showed lava flowing into plantations of coffee and avocado.

Insivumeh said the lava flow was less than a mile from El Patrocino and was advancing between 165 to 200 feet per day.

Insivumeh added that in case people had to evacuate they had 14 shelters ready in San Vicente Pacaya, Amatitlán, and Villa Canales.

The Pacaya volcano which rises 8,372 feet above sea level is in the Escuintla department about 15.5 miles to the south of Guatemala City.

Last week, the Pacaya sprayed gases and ashes upwards up to 14,800 feet above sea level and covered every town and city, including Guatemala City, in a 20-mile radius with black ashes. The International Aurora Airport in Guatemala City had to be closed on Tuesday, March 23, and all flights to and out of Guatemala City were cancelled.

Insivumeh said yesterday that heightened activity is expected during the next few days.