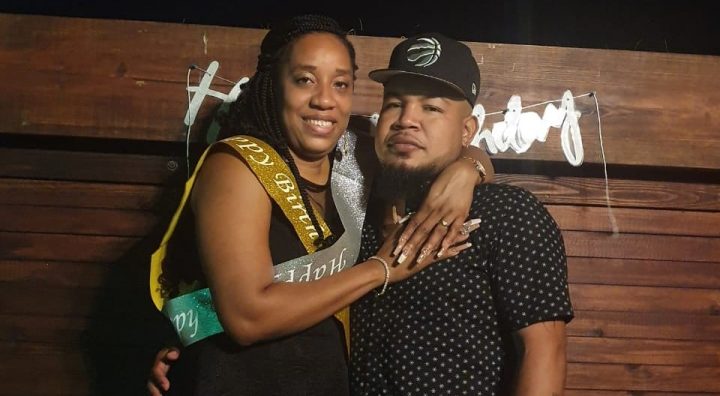 By BBN Staff: Marriage proposals aren’t normally newsworthy, but one Belize City man popped the big question in such dramatic fashion over the weekend involving police and a fictional murder investigation; it spawned a video that went viral on Facebook and impressed this newsroom with its creativity.

In the initial video, a chaotic scene unfolds inside a restaurant as police in camouflage fatigues restrain a man around the dinner table, and his significant other and guests present watch in panic as the frenzy unfolds. In a surprising twist, one officer escorts the unassuming fiance-to-be toward her man, who then falls to one knee, popping the question to his relieved, if not slightly confused, partner.

Ian Zelaya, the man who planned and staged the entire proposal drama, told Breaking Belize News the surprise proposal was years in the making. He had planned a similar proposal, in which the cops would pull him over on Albert Street and the rest of the event would take place in public before he popped the question, however, the COVID-19 pandemic put a dent in his plans. He later planned to do it on a trip to Cancun but again plans changed when international lock-downs became the norm. Determined, Zelaya decided he would not be delayed again.

Zelaya said only his closest confidants, such as his mother and best friend knew what was about to take place when the family went for dinner at Vino Tinto over the weekend. One of Zelaya’s friends, a police officer, and his unit made the entire plan come to life when they visited the restaurant unbeknownst to restaurant staff and patrons.

Police approached the table and informed that Mr. Zelaya was wanted for questioning in relation to a pending murder investigation of all things! He recounted everyone at the table falling still and growing anxious with every passing moment. Zelaya put on a performance worthy of an Oscar before finally quashing all fears and celebrating the momentous occasion with friends and family. Zelaya sent special thanks to the officers who made the unique proposal possible and a friend who had to hitchhike from Crooked Tree to be there for the special moment.

Over the years there have been numerous videos showing scuffles between police and the public, but to everyone’s relief, this one was staged and culminated with a happy ending. We have a feeling Mr. Zelaya may have given way to a new trend of dramatic marriage proposals. Only time will tell. Breaking Belize News wishes the best for the newly engaged couple!