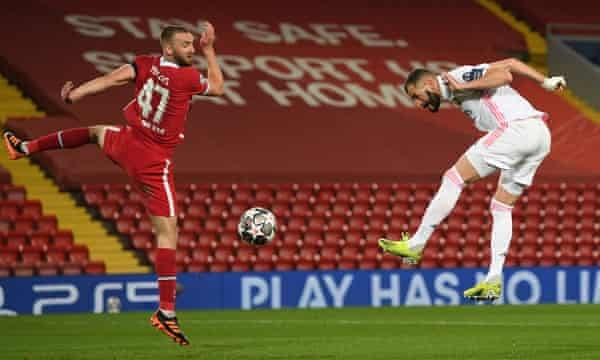 By Rubén Morales Iglesias: Real Madrid, like Manchester City in Dortmund, held control of the ball to deny Liverpool any possibilities at upsetting the 3-1 lead they carved last week in Madrid.

Today at Anfield, Liverpool were nowhere the combative side they’ve been before. Though did create opportunities through Mohamed Salah and Georginio Wijnaldum, Thibaut Courtois was up to task and stopped all The Reds advances.

The scoreless draw at the half gave the idea of what was coming in the second half. An indeed that’s what happened. Action continued the same with Liverpool unable to get past Courtois.

This favoured the Spanish-side who were in the driver’s seat. Their two-goal lead gained last week in Spain looked insurmountable.

With ten minutes left, Liverpool manager Jürgen Klopp inserted Alex Oxlade-Chamberlain and Xherdan Shaqiri for Mané and Firmino in an effort to give his team more firepower, but before they could even go in Benzema was missing a break for Madrid.

Real are on to the semifinals where they will take on another English-side in Chelsea.