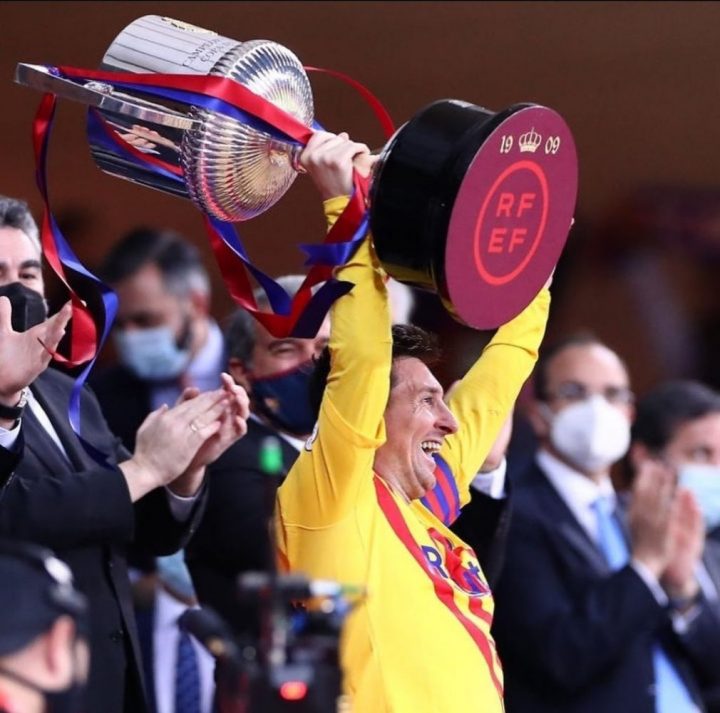 By Rubén Morales Iglesias: After a rough first half, Barcelona turned on the pressure and blew away Athletic Bilbao 4-0 in the 2021 Copa del Rey final at Estadio La Cartuja in Sevilla.

Lionel Messi scored a brace to lead the Catalan squad to their 31st Copa del Rey title and was named Most Valuable Player of the final.

Today’s win was the seventh time out of nine that Barça have beaten Athletic in Copa del Rey’s finals.

Antoine Griezmann and Frankie de Jong bagged the other two goals to make it look like a walk in the park.

Griezmann broke the deadlock in the 60th minute off an assist from de Jong.

De Jong himself made it 2-0 three minutes later heading in the ball in between two defenders off a Jordi Alba cross that came from the left in the 63rd.

Messi then worked his wonders. In the 68th, he cut forward on the left flank, making a pass on the run and getting it back penetrating deep and firing a left-footer past two defenders and the goalkeeper Unai Simón making it 3-0 Barça.

Then Messi put the cherry on the cake in the 73rd slamming home a backward cross by Alba who had made a 1-2 pass with Griezmann on the left lane before serving it to Messi. Simón managed to touch the ball with his hands, but the shot was too strong and well-placed. 4-0 Barça.

Griezmann got one more in the 86th but the Frenchman was offside so the goal was disallowed.

This was a difficult loss for Athletic Bilbao after losing a second Copa del Rey in a short span of time.  Just two weeks ago they fell 3-1 to Real Sociedad in the 2020 Copa del Rey final which had been postponed last year due to COVID-19.

This was the first title won by Ronald Koeman as Barcelona coach. He won several as a player. But, it could very well be Messi’s last in a Barcelona jersey.