More than $187 million in initial damages to St. Vincent due to La Soufrière volcano eruptions 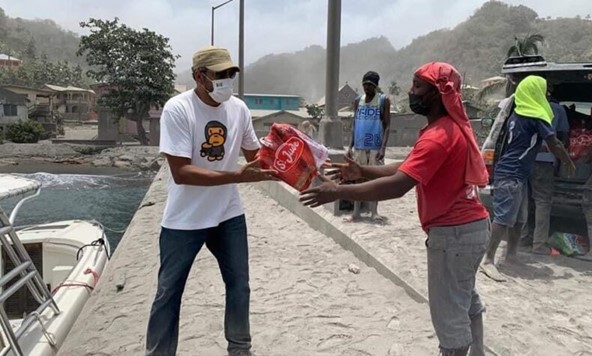 By Rubén Morales Iglesias: The economic impact due to the eruptions of La Soufrière volcano is “incalculable,” said St Vincent and the Grenadines (SVG) Minister of Finance & Economic Planning Camillo Gonsalves.

According to SVG’s News784, Gonsalves said that coupled with the COVID-19 pandemic, the eruptions had affected half of St. Vincent’s gross domestic product.

“We can say that the immediate humanitarian costs are likely to exceed EC$100 million (US$37 million) and over US$150 million of infrastructural damage has already been tabulated and that doesn’t count the cost of clean up, that doesn’t account the cost of losses that farmers and other business folk have experienced,” said the SVG Minister of Finance.

Gonsalves said that the pyroclastic flows and ashes had affected a great part of the agricultural lands in the red and orange zones in the Windward side of St. Vincent severely damaging the country’s agricultural crops.

Gonsalves reported that it may be a couple of years before the country can recover and achieve its 2019 numbers.

Gonsalves said that it would take at least two years for SVG to recover.

“We haven’t run the numbers yet but it goes without saying, that there will be another economic contraction in St. Vincent and the Grenadines this year and even if there is growth next year, it will be growth from a hole so we won’t be back to where we are supposed to be, I believe for a couple of years to come,” the Minister added.

For now, government officials have said that they expect the people in shelters will have to stay put for at least three more months.

Meanwhile scientists have predicted that eruptions could continue for a year more.

Gonsalves said that the work to clean the ashes itself will have a multi-million-dollar price tag.

“It is going to be a multi-million-dollar price just to get the ash out of the way and then there is the reconstruction phase. We have not yet quantified the cost of reconstruction but rough estimates is that on the windward side of the red zone about 20 percent of private homes have been either damaged or destroyed,” Gonsalves said. “We are going to have to deal with that. Roads have been destroyed, infrastructure in the north has been destroyed so there is also a construction cost there.”