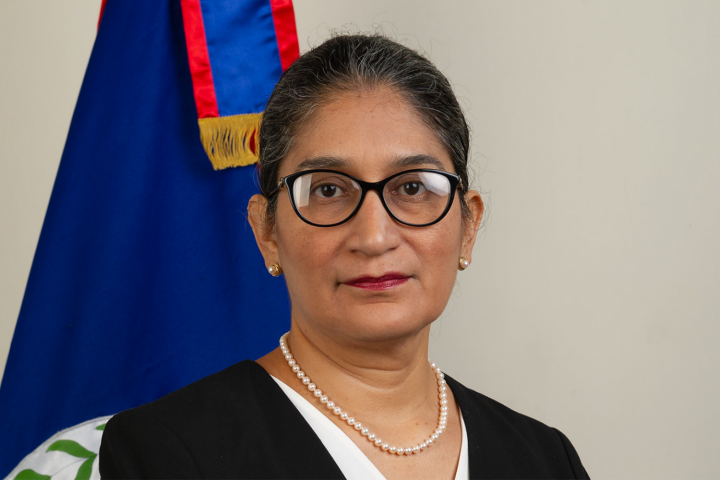 By Aaron Humes: Try though the trade unions might, they may not be able to get around no less than the Constitution of Belize with regard to salary adjustments.

That is a legal opinion by no less than the country’s top legal eagle, Attorney General Magali Marin-Young, who cited section 106(3)(c) which reads as follows:

“106 (3) Subject to the provisions of this Constitution, the Governor-General, acting in accordance with the advice of the Minister or Ministers responsible for the public service given after consultation with the recognized representatives of the employees or other persons or groups within the public service as may be considered appropriate, may make regulations on any matter relating to- … (c) the fixing of salaries and privileges;”

The provision is express, said Marin-Young, and is no different from the actions of private employers in having a right to fix salaries, without the provision for consultation.

The A.G. said Minister Henry Charles Usher feels he has fulfilled the requirement of “genuine consultation” with the unions with regard to lowering the fiscal deficit, including both face-to-face and written communication. He was not, she maintained, “lording it over” the unions, and it is unfortunately necessary otherwise Belize may need to go to the International Monetary Fund (IMF) and impose even worse measures, including possibly devaluation.

And the adjustment is intended, she pointed out, to be as short a fixed period as possible: “Yes, the intent initially is for a fixed period. But the Government has undertaken to review annually the fiscal position, and if it is that we can afford to revert back to salaries pre- any reduction that is made, that he is going to do so.” She could not give a timeline for any implementation, but there was last a wage and increment freeze between 1995 and 1997, in the time of Sir Manuel Esquivel as Prime Minister.

The decision by the Government, when it is made, is open to legal challenge, Marin-Young also noted.

We’ll have more directly from Minister Usher later on.