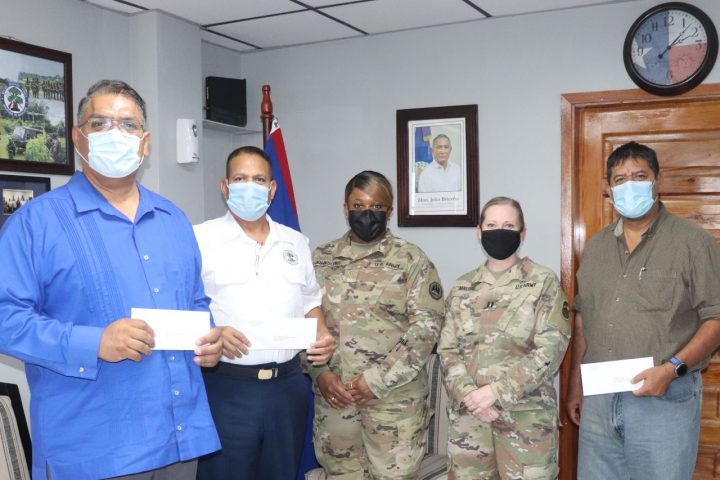 By Rubén Morales Iglesias: The Louisiana National Guard (LANG) and the BDF on Friday, April 23, celebrated the 25th anniversary of the State Partnership Program.

According to the United States Defense Visual Information Distribution Service (Dvids), the State Partnership Program “is a unique component of the [US] Department of Defense – a state’s National Guard – with armed forces or the equivalent of a partner country in a cooperative and mutually beneficial relationship.”

Brigadier General D. Keith Wadell, the adjutant general of LANG, first stint in Belize was as a young engineer soldier more than 25 years ago. At the time he helped to build schools here and he says he is pleased to see how the relationship between Louisiana and Belize has grown.

“What a historic road our militaries and people have walked together since April 23, 1996! Through hurricanes, floods, exercises, and more, we have stood shoulder to shoulder,” said Waddell.

Dvids said the State Partnership Program was officially started in 1996.

The Louisiana National Guard and the BDF have participated in 270 events throughout the period according to Dvids.

This year, the Belize Youth Challenge Program (YCP) and the Louisiana YCP shared information about the challenges faced and solutions to operating under the current COVID restrictions, said Dvids.

Since 1996, LANG has helped to build school buildings in places like Biscayne, Crooked Tree, and Orange Walk, Belize. In 2007, the LANG and the BDF worked together with military members from eleven different countries in building schools capable of withstanding hurricane-force winds. Then, in 2010-2011, the LANG and the BDF joined forces in Haiti during the earthquake recovery effort.

“It’s an honor and a privilege to be in a position of the commander of the Belize Defence Force during this celebration of our 25th anniversary between the BDF and the Louisiana Army National Guard,” said Ortega. “I know, twenty-five years ago, the formalization happened, but the seeds were sown long before.”

Dvids said that in 2016, the LANG trained with a BDF Volunteer battalion during Battle Camp focusing on best practices and patrolling. Then in 2017, LANG’s first officer completed the BDF Jungle Warfare Instructor Course.

The BDF has sent 12 personnel to Louisiana to attend Officer Candidate School and six to attend the Non-commissioned Officer Academy.

“I believe that, together, we have built this strong foundation based on shared similar struggles, cultures, and values – a love of life, people, and the desire to Protect What Matters,” said Waddell. “I am excited about the future and to build on this incredible friendship, which is a model for the rest of the world to follow!”

The United States has state partnership programs with a total of 76 countries around the world.