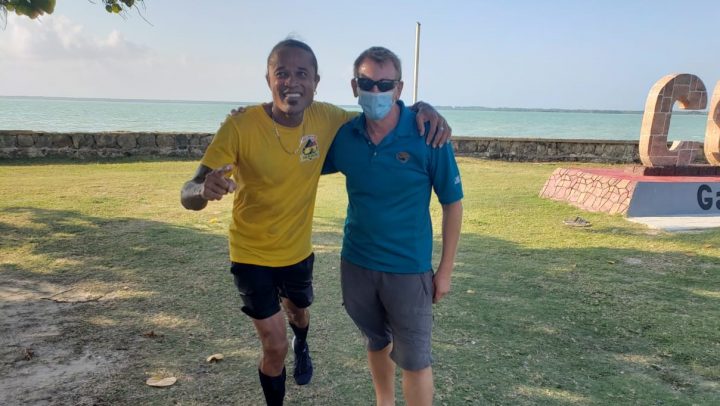 By Rubén Morales Iglesias: The San Pedro-based runner Ian ‘Lion’ Gordon, 43, who has been running marathons since five years ago, this morning started his 8-day half-marathon tour of Belize in Corozal Town.

Gordon said to Breaking Belize News (BBN) that he plans to run 13.1 miles (half marathon) every day in the cities and towns of Belize covering a total of 104.8 miles in all seven districts.

Gordon, who was born in Belize City, has been living in San Pedro for the last 22 years, so he expects to finish his 8-day run at La Isla Bonita.

“Dave Newton came up big time for me, he hosted me at his house,” Gordon said in appreciation of the help he received from Newton and others in Corozal.

Unfortunately for him, today his digital watch with which he clocks himself got stuck after six miles and he couldn’t record his time.

On Tuesday, April 27, at 6 am, Gordon will start the second leg of his half-marathon tour of Belize at Queen Elizabeth Park in Orange Walk Town. Gordon said the run will finish there as well.

On the third day on Wednesday, April 28, Gordon will be in Punta Gorda starting at the Peini sign going to downtown.

On Thursday, April 29, he’ll be in the Stann Creek District starting at the Hopkins junction and finishing at the Drums of Our Fathers monument in Dangriga.

He’ll close off April on Friday in the hilliest of towns, San Ignacio and Santa Elena.

On Saturday he will be in the capital, Belmopan

“I will run the ‘We’re Back 5K’ and then just continue on for ten more miles,” Gordon said.

The We’re Back 5K is the first in-person race after the lockdown that is organized by TotalTimebz in Belmopan on Saturday.

The seventh leg will be in Belize City on Sunday, May 2.

On Monday, May 3, Ian ‘Lion’ Gordon will finish his 104.8 miles run in San Pedro to coincide with the fifth anniversary of his becoming a marathoner.