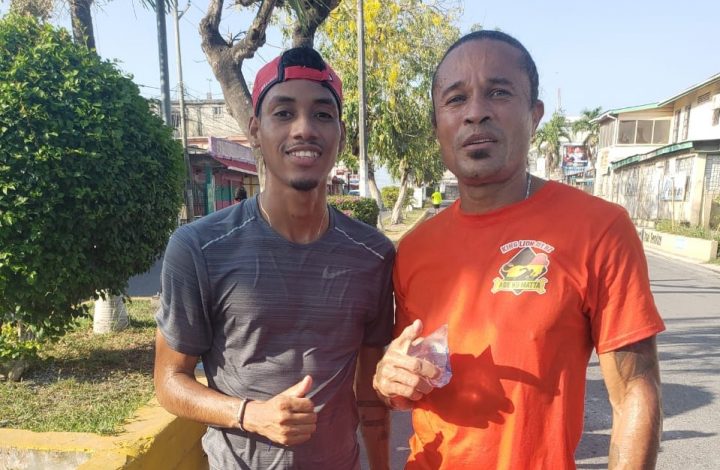 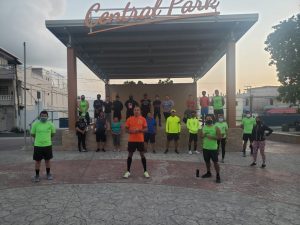 By Rubén Morales Iglesias: Ian ‘Lion’ Gordon, 43, who is on an 8-day run of Belize today completed the 2nd leg in Orange Walk in one hour and 41 minutes.

At 6 a.m., accompanied by Brandon Adolphus and other Orange Walk runners, Gordon set off on his 13.1 miles (half marathon) run of Orange Walk starting and finishing at Central Park.

“Brandon made me push during the last two miles,” Gordon said of Adolphus. “He’s a good person. I have to big him up. He is very talented; he just needs a little extra help, and we have a champion in him.”

“I’d like to thank Hotel de la Fuente, Orlando Che, the Orange Walk Sports Council, Emanuel Jones of KTJ’s Welding and Diner, and all the runners who showed up and accompanied me,” Gordon said. “It was a warm-hearted welcome.”

Gordon said to Breaking Belize News (BBN) that he is running a total of 104.8 miles in eight different towns plus Belmopan and Belize City in eight consecutive days in celebration of his five years as a marathoner.

He is finishing the run in San Pedro on the fifth anniversary of his first marathon on May 3.

After Orange Walk, he headed south to Punta Gorda today where tomorrow at 6am he will start his run at the Peini sign going to downtown.

‘Lion’ said he still doesn’t know where he will be staying in Punta Gorda but he is ready for Wednesday.

On Thursday, April 29, he’s going Dangriga running from the Hopkins junction to the Drums of Our Fathers monument.

On Friday, Gordon is off to Cayo where he will do his half marathon in San Ignacio and Santa Elena.

The capital Belmopan awaits him on Saturday he will be run the ‘We’re Back 5K’ as the first part of his 13.1-mile run.

Sunday, May 2 will bring him to Belize City before heading home to San Pedro for the final leg on Monday, May 3 to coincide with the fifth anniversary of his becoming a marathoner.