Embassy of the Republic of China (Taiwan) donates $50,000 to Scouts for steel band instruments 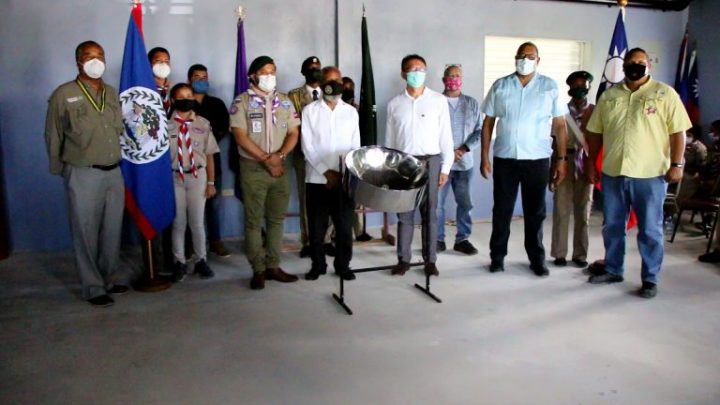 By Ruben Morales Iglesias: Belize Scouts will have new instruments for a steel band courtesy of the Embassy of the Republic of China (Taiwan) which donated $50,000 to the Belize Scouts Association and Foundation on April 27, according to Love FM.

The donation was presented by the Ambassador of the Republic of China (Taiwan) David Kuan-Chou Chien to the Scout Association of Belize President Fernando Oliva.

The donation was presented at the Sir Colville N. Young Building, the new Scouting home, named after the Governor-General of Belize.

Scout president Oliva said the instruments have long been a dream.

“It was our long last dream to have a band in scouting and over the years the Governor General has donated several instruments but this is the first time that we have gotten a donation of this significant amount,” Oliva said. “So, we are eager for our scouts to live and express themselves through music.”

“As we know, the young people [are] our future hope, [are] also the hope of a country, and Taiwan is the loyal and reliable ally of Belize, so I sincerely hope that the donation to the steel pan band of the National Scout Association will have a positive impact, and a good impact on building the young people’s self-esteem and confidence and developing the righteous values of life, and help the young people to play a constructive role in the society and in the country, and most important that they devote themselves to the community service,” Chien said.

Oliva said the Scouts Association plans on having a band made up of scouts from the entire country.

“It’s going to be like an all-star band. Not to mention that each district have their own scouting band already but the steelpan will manifest scouts from throughout the country,” Oliva said.

“As the representative of the Republic of China, Taiwan and my Embassy sincerely look forward to continuing to work with the Government, people, and NGOs of Belize to further strengthen the bilateral relations and also promote the welfare and the benefit of the people of Belize,” Chien said.

Governor General Young and Dr. Rene Villanueva who are members of the Board of Directors of the Belize Scout Foundation were present at the handing over ceremony today.

Outgoing Governor General Sir Colville Young Sr. has been instrumental in obtaining musical instruments from many a school and organization over the years. He is credited with founding Belize’s first steel pan band.