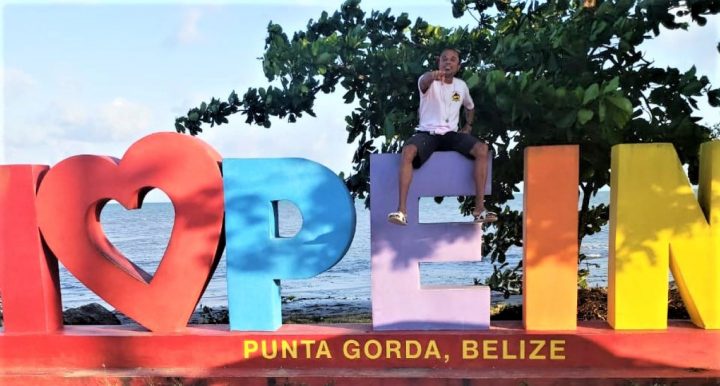 By Rubén Morales Iglesias: Ian ‘Lion’ Gordon, 43, who is on an 8-day run of Belize had his most solitary run this morning in Punta Gorda.

The ‘Lion’ ran today’s 13.1-mile course in Punta Gorda starting at the ‘I Love Peini’ sign along with Jonathan Chiquin. In Corozal and Orange Walk he had a number of people joining him for the run.

Today he started at 5:30 am and was faster running the distance in one hour, 36 minutes and 42 seconds. Yesterday in Orange Walk he clocked 1:36.

“A young and rising star, Jonathan Chiquin, who has been running for a year now, came out and he performed well with me today,” Gordon said.

Gordon who has now run 39.3 miles, has five more runs (65.5 miles) left to complete his 104.8-mile run through eight towns and cities in Belize. So far, he has run in Corozal, Orange Walk and Punta Gorda.

He says if anyone is willing to help him, they can call him at 628-6696. He needs help with fuel, in particular.

Tomorrow morning, he will set out at 5:30am from the Hopkins junction heading to the Drums of Our Fathers monument in Dangriga. Gordon said tomorrow he will have police escort for his run.

On Friday, Gordon will be in San Ignacio and Santa Elena before moving to Belmopan on Saturday where his run will include the ‘We’re Back 5K’ as the first part of his 13.1-mile course.

Sunday, May 2, he runs in the old capital Belize City before finishing his tour at home in San Pedro on Monday, May 3 to coincide with the fifth anniversary of his becoming a marathon runner.