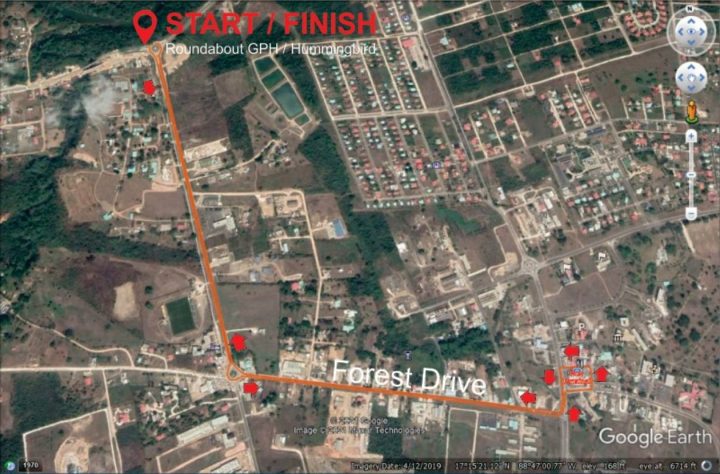 By Rubén Morales Iglesias: The first in-person race, The We’re Back 5K, is set to take place early tomorrow morning in Belmopan. This is the first race where all the runners will be there in person after the more than a year lockdown on sports due to the COVID-19 pandemic.

The race, organized by Ricardo Salazar of Totaltimebz.com, starts at 6am by Guanacaste Park at the Belmopan cutoff the joins the George Price and Hummingbird highways.

“The route will be from there, left on Forest Drive, left towards the bus terminal, run around the terminal, head out back to Forest Drive, then right turn to Hummingbird Highway and finish at the Guanacaste roundabout,” Salazar said.

“Let’s celebrate the return of our beloved sports and Total Time’s first anniversary of its first virtual event with a 5K on May 1st!” Salazar said on his Belize Running Events Facebook page when he announced the race.

Two weeks ago, Minister of Sports Kevin Bernard announced that non-contact sports like athletics would be allowed to restart after more than a year lockdown. Athletes of contact sports will only be allowed training sessions.

Salazar said that The We’re Back 5K race on Saturday, May 1 in Belmopan will coincide with the Lion’s Half Marathon Country Tour organized by Ian “Lion” Gordon. Gordon will race in the 5K as part of his Half Marathon that day.

Earlier today Gordon said Ruta Maya champ and long-distance runner Ana López will also be participating both in The We’re Back 5K and his 13.1 run.

“The runners will leave at 15 seconds intervals because of the COVID-19 protocol to avoid mass gatherings,” Salazar said.

“Mass starts will be contrary to the protocols so we will have a physical distance start grid minimum of 6ft spaced apart. And leaving at intervals will also allow less crowding on the route and less overtaking of runners and bunching up at the start.”

Salazar said medals will be given to the Top 3 in the Men’s and Women’s Categories.