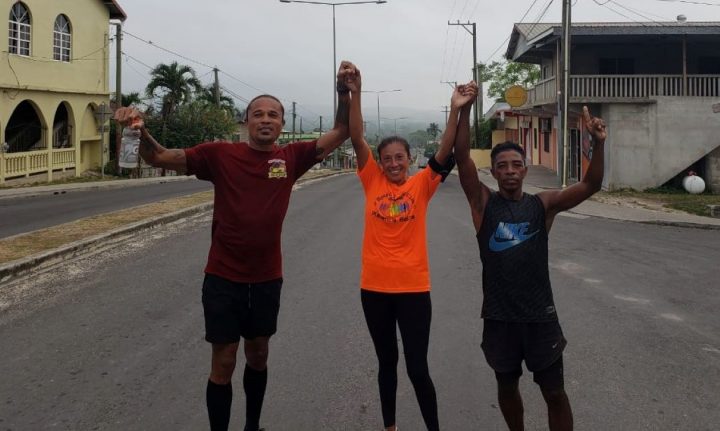 By Rubén Morales Iglesias: San Ignacio and Santa Elena was Ian ‘Lion’ Gordon’s 5th leg of the 8-day run of Belize he is doing in celebration of the five years since he became a marathon runner.

Gordon said Espat said she was going to run three miles and ended running the entire 13.1 miles with him.

Gordon also said he wanted to thank Chiqui Espat and Rita Recinos for providing him with food.

“Big up ex-FIFA referee Christopher ‘Superman’ Reid, he’s my coach, and he helps to push me to higher limits,” Gordon said.

Tomorrow, in Belmopan, Gordon will run another half-marathon, but it’s going to be different than the other days as he will start off with the runners doing the first in-person race after sports were forbidden for more than a year due to the COVID-19 lockdown. The ‘We’re Back 5K’ starts at Guanacaste Park at 6 am. Gordon will run the 5K and will then continue on his way to complete his 13.1-mile course.

Gordon said Ana Lopez will run with him again tomorrow in Belmopan.

After tomorrow, Sunday, May 2, Gordon will be in Belize City for the second-to-last stage of his Run Around The Country starting at the Baron Bliss Lighthouse.

The country run ends in San Pedro, Ambergris Caye on Monday, May 3, the fifth anniversary of Gordon becoming a marathon runner.