6 legs down, two more to go in 8-Day Tour of Belize for Ian ‘Lion’ Gordon after Belmopan; Belize City run is on Sunday 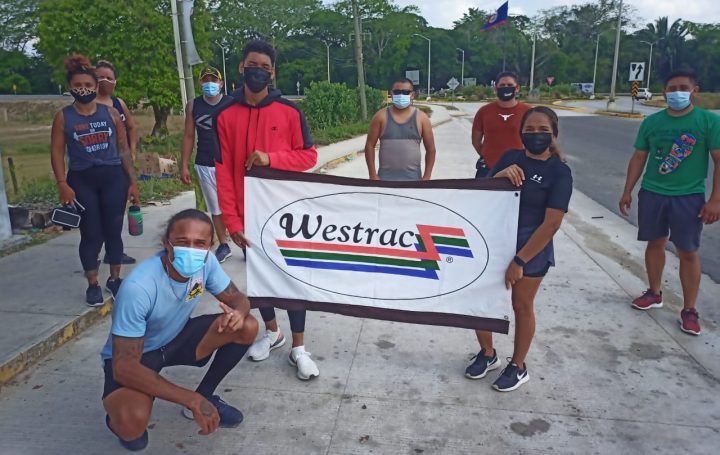 By Rubén Morales Iglesias: Only Belize City and San Pedro left for Ian ‘Lion’ Gordon in his 8-day run of Belize after completing the sixth leg today in Belmopan.

Gordon said he ran the 13.1 miles from Guanacaste Park into Belmopan following the trail of the We’re Back 5K runners and heading farther into the capital before turning back to Guanacaste Park.

He was accompanied by a host of runners from the Westrac Team and he said he slowed down because ‘you never leave anyone behind.’

“The group that was with me, the Westrac Team, we started after the runners in the We’re Back 5K were on their way,” said Gordon.

“I want to thank Miss Chiqui Espat and Miss Rita Recinos for the food they provided for me yesterday,” Gordon said. “I spent most of the day yesterday at the Luis August gym in San Ignacio meeting people.”

Gordon said he traveled to Belmopan this morning for the race and once that was over he made his way to Belize City for Day 7 on Sunday.

“We’re going from the Baron Bliss Lighthouse, straight up to Digicell Park, to the Karl Heusner, to the Northern Highway, hit Chetumal Street and Lake Independence Boulevard, Faber’s Road, Port Loyola, Yabra, Regent St by the House of Culture, take the first street to the right [Rectory Lane] to the waterside on Southern Foreshore, Swing Bridge, North Front St, passing by the Tourist Village and right back to the Bliss Lighthouse,” said Gordon.

Up to now, Gordon has run six legs in Corozal, Orange Walk, Punta Gorda, Hopkins-Dangriga, San Ignacio & Santa Elena, and Belmopan. Every day he has run 13.1 miles, except Thursday in Dangriga when he did 15.51 miles for a total of 81 miles. By the time his ‘King Lion run around the country’ is over he should have run just over 107 miles.

After Sunday, he’ll only have one more leg left, and that we’ll be in San Pedro where he lives. According to Gordon, his country run ends in San Pedro, Ambergris Caye on Monday, May 3, the fifth anniversary of his becoming a marathon runner.