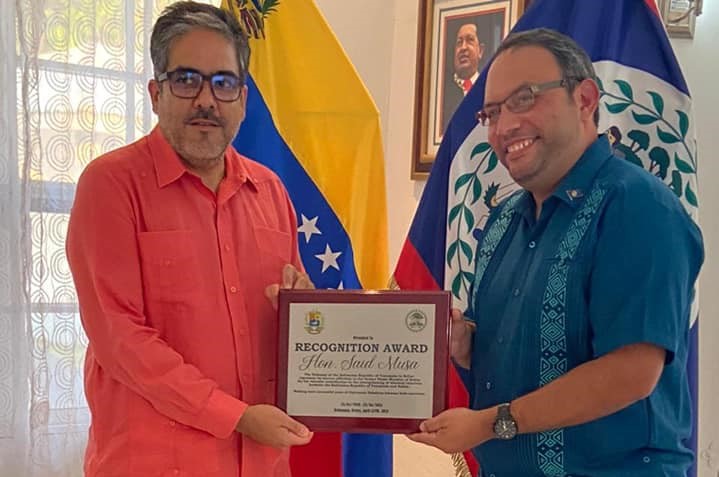 By Aaron Humes: Ambassador of the Bolivarian Republic of Venezuela to Belize, Gerardo Argote, on Friday hosted Henry Charles Usher, Minister of Public Service, Constitutional and Political Reform; Allan Pollard the Deputy Mayor of Belize City, and Prof. Cesar Ross, the President of the Belize Committee of Solidarity with the Bolivarian Revolution (BelVen).

The countries are marking 32 years of bilateral relations, tightened in the last decade or so by the Petrocaribe program at which Belize has obtained petroleum and various derivatives at low cost, with the money saved assigned to social projects.

Usher, representing the Government, expressed the need for both countries to continue to build together our true freedom, a joint development of our peoples that will help us to emerge from poverty and self-determination as free peoples, according to a statement from the Venezuelan Embassy.

Ambassador Argote expressed the limits and deep ties that have been growing on the basis of common principles and values, like the respect of national sovereignty and non-interference in the internal affairs. He recalled one of the great orientations of the Eternal Commander, Hugo Chavez who said: “No, they will not be able, given this circumstance of new difficulties – of whatever size – the response of all and all the patriots, the revolutionaries, those who feel the country even in the guts as Augusto Mijares would say, is unity, struggle, battle and victory.”

The Embassy also recognized former Prime Minister Said Musa for his particular contribution and commitment to strengthening bilateral relations between Venezuela and Belize.