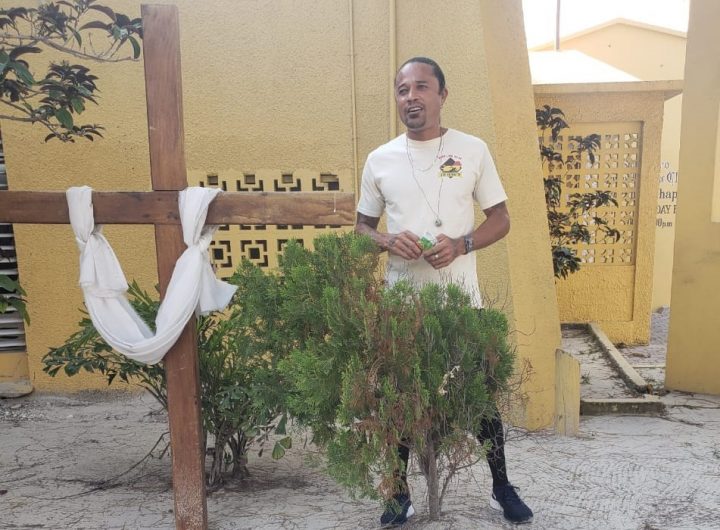 By Rubén Morales Iglesias: Ian ‘Lion’ Gordon, 43, this morning completed 110-mile Run Around the Country in San Pedro, Ambergris Caye, in celebration of his five years of running marathons with his friends in San Pedro where he’s been living for the last 22 years.

Gordon, originally from Belize City, started his country trek eight days ago on Monday, April 26 in the north in Corozal. The next day he was in Orange Walk. He then traveled south to Punta Gorda and Hopkins-Dangriga. After that he trekked west to San Ignacio & Santa Elena and Belmopan, before covering the entire mainland in Belize City on Sunday.

While all his runs started between 5:30 and 6 a.m. today in San Pedro, Gordon started his final run at 8 a.m.

“We started at Central Park, ran all the way to the bridge, went over it to a little bit past Matachica and then came back, passing the Back St, through Sacachispas, by the Co-op, took a right to the Middle Street, straight down to San Pedro RC School, then took two left to Front St and finished at the Central Park,” Gordon said.

Today a number of people made the run with him including a friend who lost 31 pounds in the last year. The friend said on Facebook Live that last year he couldn’t run not even a mile but was able to make the whole run with the ‘Lion’ this morning.

“This is his hometown, we came out to show him support,” said another friend.

“First of all, I’d like to give thanks for this event and helped out Lion in doing this run,” said runner Kian Trejo of Kiki Athletics. “He’s been an inspiration to many youths and many people around the island and of course and the country of Belize especially with that 101 mile run he did last year.

“Our youth are our future. I believe the more we implement positive things for our youths, we’ll have a more fruitful Belize especially in our sporting community. But not only sports, but also in music, science, robotics, in any new thing that people are trying to do events, I encourage everybody to support.”

Along the way Gordon was helped by a host of people who either provided him where to stay, fed him or helped him with fuel for his transportation and quite a number of runners came out to accompany him in his Run Around The Country.

Gordon was not running to set any records, but rather to celebrate his accomplishment of five years running marathons, so his times varied from the shortest time of 1 hour 36 minutes and 42 seconds in Punta Gorda to his longest in Belize City 2:42 because he ran at the pace of the people who accompanied him and in some cases, he said he dropped back for some because of his idea of “leave no soldiers behind.”

Gordon was accompanied during his country run by his daughter Nyla Gordon, 16, a third form student at San Pedro High School. He says he’s very proud of her.

After completing today’s race, Gordon went by the San Pedro RC Church, which is celebrating the Day of the Cross, to end the Run Around The Country in thanksgiving.