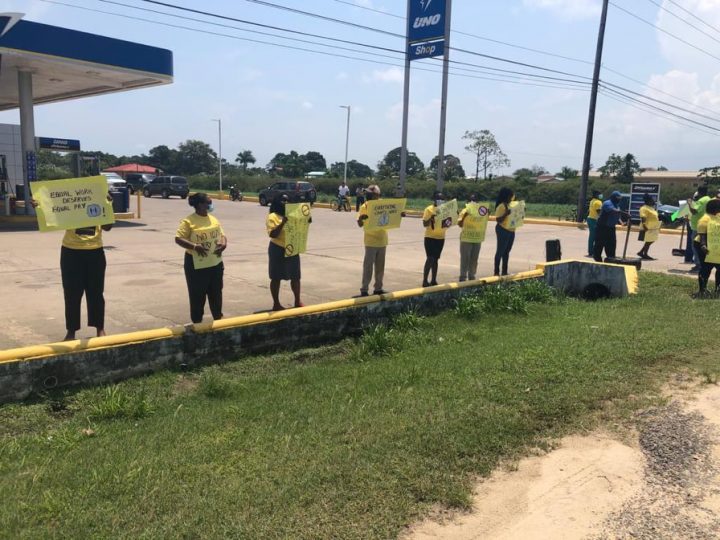 By Benjamin Flowers: All members of the Joint Union Negotiating Team (JUNT), which is negotiating cost-cutting measures with the Government of Belize, will be officially on strike as of tomorrow, May 4, but took the time today, to explain in detail the reason they are all on strike.

The Public Service Union (PSU) and Association of Public Sector Senior Managers (APSSM) begin strike action tomorrow as per a letter sent to the Minister of Labour and the Labour Commissioner dated April 29. They join the Belize National Teachers Union, which began strike action as of Monday April 26. The JUNT’s statement issued today highlighted total demands that the unions are making of GOB.

Those demands include: written commitments with specified timelines for the implementation of the United Nations Convention Against Corruption (UNCAC); the implementation of four good governance laws covering whistleblowers, illicit enrichment, asset recovery and campaign financing; resumption of negotiations with the JUNT referencing the 10 percent salary cut and three-year increment freeze; the establishment of a body comprised of the Government, National trade Union Congress of Belize and the private sector to coordinate the adoption of reform strategies; the removal of ministerial discretion from tax, land and labour issues; aggressive tax collection and strengthening of tax departments; the implementation of policies to monitor the foreign exchange reserves; passing legislation setting a definitive date for the private sector to move to point of sale system; and audits of community votes and PetroCaribe Funds.

The unions say that they are prepared to shut down services entirely for as long as it takes to get these demands honored.