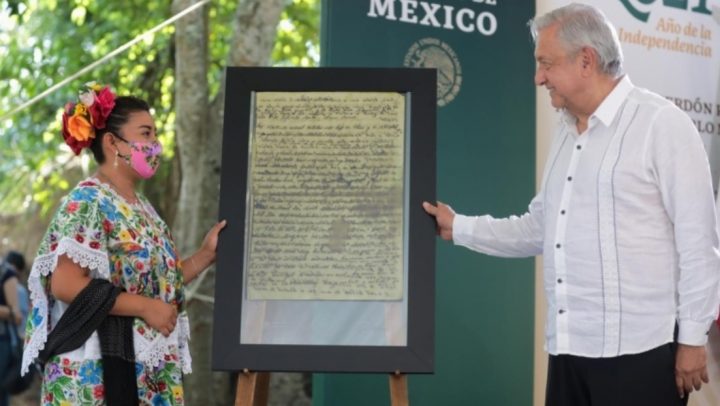 By Rubén Morales Iglesias: The government of Mexico today apologized to the Maya population for centuries of brutal exploitation and discrimination, said Mexican daily publication Excelsior.

“We offer most sincere apologies to the Maya population for the terrible abuses that individuals and national and foreign authorities committed against them throughout the conquest during three centuries of colonial domination and in two centuries of the independent Mexico,” said Mexican president Andrés Manuel López Obrador in Felipe Carrillo Puerto reported Excelsior.

“For centuries, these people have suffered exploitation and abuse,” said Mexican Secretary of the Interior Olga Sánchez Cordero. “Today we recognize something which we have denied for a long time, the wrongs and injustices committed against the Mayan people.”

“Today, we ask forgiveness in the name of the Mexican government for the injustices committed against you throughout our history and for the discrimination which even now you are victims of.”

Guatemalan president Alejandro Giammattei who was also present at the apology ceremony said that the loss of human lives, of thousands of Mayas who were sacrificed will forever be lamented and their survival from slavery and from the confrontation between nations will be honoured.

However, Giammattei said, today organized crime, malnutrition and the migration phenomenon take away the lives of the indigenous peoples who are still excluded from development.

According to AP, today Mexico is observing the anniversary of a battle in 1901 battle which put an end to the War of Castes, one of the last indigenous revolts in North America.

The apology ceremony was held in the community of Tihosuco in Felipe Carrillo Puerto, previously known as Chan Santa Cruz, which was the heart of the Mayan rebellion.

AP said the apology is part of the commemorations of the 500th anniversary of the Spanish Conquest of Mexico (1519-1521), and 200 years since Mexico got its independence from Spain in 1821.

The War of Castes (1847-1901), which spread to Belize (Remember Marcos Canul), ended when the Mexican government troops captured Felipe Carrillo Puerto in May 1901.

Carrillo Puerto was a Mexican revolutionary of Mayan descent who later became governor of Yucatán and was executed in 1924.

The Maya still live in Quintana Roo but they been left out of the tourism industry in areas like Cancún and Playa del Carmen, said the AP report, living as “small-scale farmers or fruit growers, or as construction or cleaning workers at resorts.”

“We realize that we have a great history, that we are held up as an example, and people make a lot of money off our name, but that money never shows up in our communities,” said Mayan activist Alfaro Yam Canul.

The AP article said that vast majority of Mayas live in poverty in an area that makes its money, as Yam Canul said, off the Maya ancestry.

Yam Canul reportedly asked López Obrador to allow the Mayas the right to promote eco-tourism without the high-rise hotels in the Sian Ka’an nature reserve which stretches 75 miles on the coast and is comprised of 1.3 million acres of mangrove, wetlands and shallow bays and lagoons.