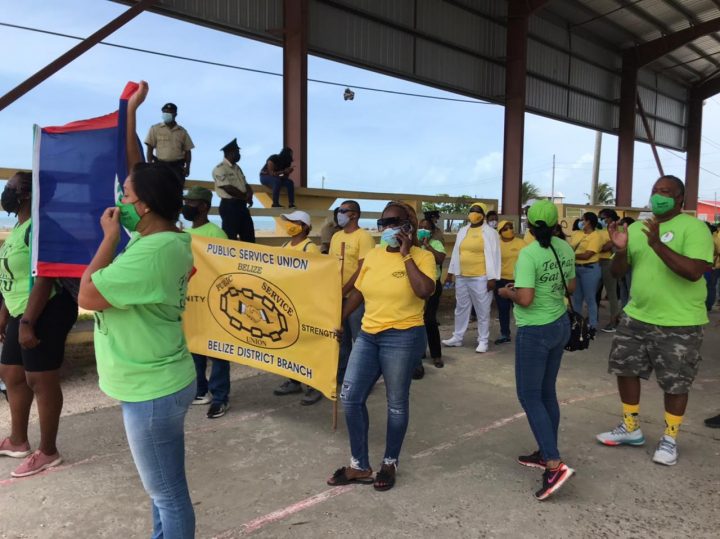 By Benjamin Flowers: The members of the Joint Union Negotiating Team are as engaging their respective memberships to determine whether or not strike action will continue tomorrow, May 17.

Breaking Belize News (BBN) has confirmed that the leaders of the Belize National Teacher’s Union (BNTU) and Public Service Union (PSU) have issued surveys to their general memberships for a mandate on either continuing or ending strike action. Up to this afternoon, there has still been no definitive word on what happens tomorrow.

The Government of Belize (GOB) warned the unions last week that teachers and public officers who remained on strike after May 15, would have their salaries docked for every day they remain off of the job. In a letter dated May 12, GOB informed the unions of a list of “undertakings” that the government will be implementing going forward, which include cutting the salaries of teachers and public officers by 10 percent, as was approved in the national budget, and freezing their increments for the next three years.

GOB also said that it will be passing good-governance legislation in accordance with consultations held with the unions as of February 10, pursuing outstanding tax revenues, conduct a rationalization of the public service, and audit the spending of PetroCaribe funds under the United Democratic Party.

Government also put forward options for compensation for the salary reductions which include an annual performance bonus, which would be the equivalent of any overperformance of its primary balance target for that year. Notable if there is no overperformance, no bonus will be paid out. Other offers include speaking with financial institutions to those affected by salary cuts cash flow relief on loan payments, discounted data packages from Belize Telemedia Limited, national health insurance paid at an 80/20 split between Government and teachers, and making special facilities available at the Development Finance Corporation and National Bank fo Belize.

The unions are still considering their options in that regard.