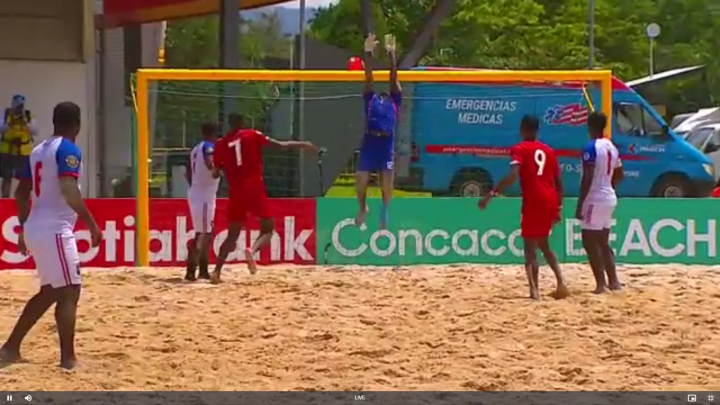 By Rubén Morales Iglesias: The Bahamas pounded the Dominican Republic 10-2 in Group B of the 2021 Concacaf Beach Soccer Championship on Tuesday at the Sports Complex Fedefutbol-Plycem in Alajuela, Costa Rica.

Lesly St. Fleur scored five goals in the Bahamas walk over. Timothy Munnings scored two, while Kyle Williams, Gary Joseph and Wood Julmis contributed one each. Miguel Moreta scored for the Dominican Republic. Their other goal was a Bahamas own goal.

In the other Group B game, El Salvador trampled over Guatemala 7-1 for their second victory in same amount of games. Francisco Velasquez netted two while Eliodoro Portillo, Heber Ramos, Exon Perdomo, Elmer Robles and Andres Cruz had one each. William Alvarez scored Guatemala’s only goal.

In Group C, the United States totaled six points after downing Trinidad and Tobago 5-2. Tomas Canale scored a brace for the Americans, whose other goals were scored by Christopher Toth, Nicolas Perera and Gabriel Silveira. The Soca Warriors’ goals were scored by Akinola Gregory and Dominic McDougall.

And in the three-team Group A, Panama ran over Belize 8-1. Alberto Kelly scored two while Jaime Londoño, Eliécer García, Alfonso Maquensi, Rigoberto Villarreal, Edgar Carvajal and Pedro Torres converted the others. Marlon Meza, who scored his second goal of the tournament, got Belize’s only goal.

The first round of the tournament will be completed today.